The British Library recently called for volunteers to help ‘georeference’ over 700 historic maps of London, England and Wales.  They digitized the maps but needed the assistance of real live human beings to read the maps, and link them to equivalent maps on Google Earth, in place, size and projection.

It’s yet another fascinating experiment in crowd sourcing – but I’m afraid you can’t join in, because they got so many volunteers that the work was completed within a week!  They now plan to load another 1000 digital maps.  If you want to get involved you can register and they will notify you when they are ready to roll.

According to the accompanying video, the technology of linking past and present geographical features seems fairly straightforward: they use the Tower of London as an example, and it’s been in the same place for nearly a thousand years. 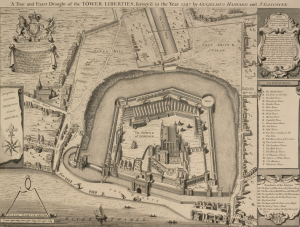 Other geographical features on a landscape are trickier.  Where is the Fleet River these days?  Rivers are particularly vulnerable – they are constantly being diverted by urban development, or silt up because of agricultural development upstream.

Coastlines change too.  Many ancient ports have silted up – like Ostia, the port of Imperial Rome – but they usually do so fairly slowly.  Sometimes though, geographical features change comparatively quickly, with historical consequences.  If we leave aside catastrophic events like tsunamis or earthquakes, we are still left with the gradual impact of wind, water and sand.

Here in southeast Queensland, shifting sand dunes have changed the landscape since Cook passed this way in HMS Endeavour 1770, and make historical map-making a challenge.

The Brisbane River empties into Moreton Bay, which is enclosed behind a barrier of large sand islands, Bribie, Moreton and Stradbroke Islands.  Cook sailed along this coast on 16 and 17 May 1770.  A strong southerly gale, rocky outcrops and shoals led him to name the various geographic features Mount Warning, Point Danger and Point Lookout.  He identified Moreton Bay, and named it after Lord Morton, the President of the Royal Society, but he didn’t realise that he was passing to the east of a series of coastal islands rather than the mainland.  His course is charted here.

But maybe, in 1770, they weren’t islands at all.  Sand islands move gradually, as the dunes build up on one side and break up on the other.  Only the few rocky outcrops, such as at Point Lookout, remain as the sand ebbs and flows around them.

When Brisbane became a settlement in 1824, Moreton Bay became the shipping route between Brisbane and the outside world, with a fair number of shipwrecks.  In early September 1894, the Cambus Wallace was wrecked off Stradbroke Island.  The local residents turned out to help rescue most of those on board.  The Brisbane Courier reported on 5 September:

The scene of the wreck is only about two hundred yards off the shore, but the surf which is constantly breaking over her would render it a rather risky task to swim ashore.  Portions of the cargo, such as cases of spirits, salt, dynamite, and large pieces of wreckage, are to be seen strewn along the beach of the Island for about two miles, and the Customs authorities are doing their best to prevent…thefts…

All this activity damaged the grasses that stabilised the dunes, and more damage occurred when they blew up the dynamite, fearing it might become unstable.  Two years later, during another winter storm, the sea broke through at what is now called Jumpinpin.

The shipwreck and its aftermath undoubtedly hastened this event – but it was inevitable nevertheless, part of the constant pattern of erosion that has affected the area for millennia.  In the 1880s, one old Aborigine remembered that his father had told him about the days when Moreton and Stradbroke Islands were so close that people could shout across the gap.  Similarly, the gap between South Stradbroke (as it has been since 1896) and the Southport Spit is growing all the time.  In 1770, there may have been no gap there at all. 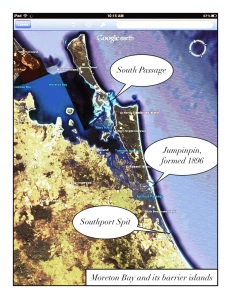 So Cook’s maps are wrong now, and sailors in Moreton Bay need to update their charts regularly, if they don’t want to risk running aground on newly formed sandbars.  Coastlines are dynamic, and we need to remember that.

As someone who loves historical maps, though, I’m really looking forward to checking out the British Library’s scanned collection.  It will be fascinating to see how London ebbs and flows around those fixed (relatively fixed) points such as the Tower of London.

This time in 2011:
Their Ghosts may be heard: The Rise and Fall of the Australian Labor Party (and boy! how relevant was that?) 24 February 2011

2 responses to “On Shifting Sands”