Last Wednesday marked the beginning of Lent, the 40-day fasting period that leads up to Easter.

Fasting can take many forms.   Muslims fast during the holy month of Ramadan by abstaining from all food and drink during daylight hours; Christians fast by abstaining from particular foodstuffs – definitely meat, sometimes other animal products such as dairy products and eggs.  The rest of us may use Lent as the occasion for a detox of some sort, giving up wine or tobacco or chocolate.

There is a spiritual dimension to going without, but the Lenten fast was once also a grim reality in temperate Europe, coming at the end of winter when food stocks were exhausted and the first fruits of the new year were yet to ripen.

We get a hint of the deep history of feast and famine that goes with an agricultural lifestyle in the way that our bodies deal with Vitamin D.  We can make Vitamin D by the action of sunlight on our skin.  In cold northern climates, where the sun is weak, people evolved to have fairer skin that could absorb more sunlight. 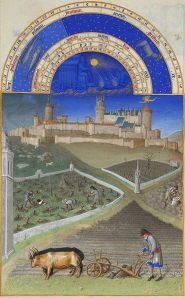 Since Neolithic times, people worked in the fields through spring and summer.  When food was plentiful, they ate well, put on weight, and stored Vitamin D in their fat. In autumn people brought in the harvest, killed their livestock, ate what they could and preserved the rest, but as the days grew cold and dark, their food supplies began to dry up.  During the hungry months of winter, they lost weight, and their fat stores released some of the summer’s reserve of Vitamin D.

Nowadays, with no winter food shortages, the fat we lay down stays on our hips forever – more’s the pity.  But our fatty tissues still absorb the fat-soluble vitamin, leaving obese people with depleted levels of Vitamin D in accessible form.

This seasonal starvation at the end of winter in northern latitudes must have existed long before the Christian introduction of Lent, but Lenten fasting fits very nicely into the pattern.  By the end of winter, most animals had been killed except for the breeding stock, so no meat was available.  Pregnant animals had yet to drop their calves, lambs or kids, so there was no milk, and broody hens similarly had to raise their chicks. Only fish was in plentiful supply, as the ice on rivers and ponds melted, and fishermen could venture out to sea again after the winter storms.

Rules about Lenten foods vary from place to place, and from one denomination to another.  Protestants sometimes abandoned fasting altogether – the Swiss reformer Zwingli proudly celebrated the beginning of Lent by eating sausages with his congregation – but in general, fish can be eaten on fast days in Catholic Europe, though Orthodox Christians take a stricter line on all animal foods.

Once you introduce rules about fasting, though, somebody will always find a loophole.  The most obvious loophole is that it is hardly a mortification of the (human) flesh to gorge on fish and seafood, and there are plenty of examples of the rich Lenten menus served in wealthy households.  St Patrick’s Day falls within Lent, and was celebrated with appropriate foods such as this ‘Patrick’s pot’ recorded by the Irish diarist Humphrey O’Sullivan in 1829:

A jolly group of us drank our ‘Patrick’s Pot’ at the parish priest’s… We had for dinner fresh cod’s head, salt ling softened by steeping, smoke-dried salmon and fresh trout, with fragrant cheese and green cabbage.  We had sherry and port wine, whiskey and punch enough.

Other loopholes arose when Christianity moved beyond the northern hemisphere.  The Spanish who settled in South America encountered many foods that had no part in the European diet, so they sometimes had trouble working out whether they fitted into the ‘feast’ or ‘fasting’ category.  Chocolate, for instance, was a sacred food for the Aztecs.  Was it therefore wrong for Christians to eat it?

And what about the animals they encountered in this new world?  Throughout South America, people eat guinea pigs, which are rodents, and clearly a form of meat.  But the largest rodent of all is the capybara.  At some time in the 16th century, the Spanish colonists applied to the Pope for a ruling on what South American animals they could eat on fast days.  They provided him with a description of this semi-aquatic animal.  Maybe they fudged the description just a little, because the Vatican decided to define the capybara as a fish.  It is still a popular treat during Holy Week.

In the Southern hemisphere, in any case, since Lent wasn’t observed during the hungriest time of the year, the logical connection between the Christian fast and the seasonal shortages of late winter was broken.

Nowadays, with fish stocks falling all round the world, it makes little sense to eat fish as a form of denial.  Giving up wine or chocolate, or taking a ‘digital Sabbath’ when the computer stays off, may be a more sensible spiritual exercise.