Was this the real Stephen Maturin? 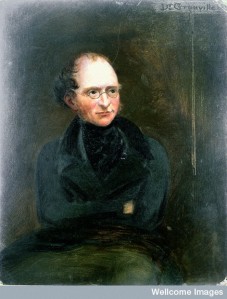 Portrait of A.B.Granville, by Alexander Craig (c.1840), from Wellcome Library

Some years ago, I belonged to a History of Medicine online discussion group.  Every few months, a query would arrive from a newbie asking what was the disease once known as the marthambles – and the questioner would immediately be outed as a Patrick O’Brian tragic, for it is one of many ailments successfully treated by Stephen Maturin in O’Brian’s highly popular Aubrey/Maturin novels, set in the Royal Navy during the Napoleonic War.  The problem is, marthambles doesn’t exist.  Sometimes a historical novelist is allowed – whisper it quietly – to make things up!

I first encountered Patrick O’Brian’s novels in the late 1970s.  I was working in the Public Record Office in London (now the National Archives) on naval records for my PhD, and the archivist who helped me mentioned O’Brian, who was working on the same records for his latest novel.

Thanks to my conversation with the PRO archivist, I know how well researched those books are.  Real historical characters appear throughout. Robert Farquhar, for instance, who becomes Governor of Mauritius in The Mauritius Command (1977), is certainly a real person: he was the consul at Ambon when John Macarthur visited there in 1802, and I’ve been writing the biography of his cousin, Walter Stevenson Davidson, for too many years.

I’m not a great reader of historical fiction and I haven’t read the whole O’Brian series, but some of my nearest and dearest are fans, and you can pick up a lot through marital osmosis.  So I know the rough outline of the characters and stories.

Stephen Maturin is a half Catalan revolutionary on the run from the authorities when he encounters Captain Jack Aubrey at the British naval base at Port Mahon, on Minorca.  A skilled doctor, he becomes a ship’s surgeon in the Royal Navy.  He performs many surgical miracles, but he is also a scientist, curious about the new discoveries in botany and physics, a linguist and a spy.

Stephen Maturin is no doubt a composite of many medical men who served in the Royal Navy, both during and after the Napoleonic Wars.  Ships surgeons generally had a reputation for drunken incompetence, but many were caring, educated men – though not many fitted as many adventures into their careers as Maturin.

It’s tempting to look for possible models, so may I offer for consideration Exhibit A:

Augustus Bozzi was born in Milan in 1783.  His father’s family was connected to the Bonapartes of Corsica, while his maternal grandmother was English.  He studied medicine at the University of Pavia, and was briefly imprisoned for his republicanism.  After he graduated, he travelled in a theatre troupe, singing and playing the guitar.  In Corfu he met William R. Hamilton, an attaché to Lord Elgin, the British ambassador in Constantinople, and travelled with him in Greece, where together they oversaw the removal of the Elgin marbles from Athens.

Bozzi joined the medical service of the Turkish navy, before transferring to the Royal Navy.  He worked on various ships in the Mediterranean, the West Indies and South America, where he met Simon Bolivar.  In 1811 he carried documents from Bolivar to Sir Robert Peel in London.  During this time he suffered from – and treated himself for – both malaria and yellow fever.  He married an Englishwoman, and adopted his English grandmother’s name, Granville.  Brought up Catholic, he converted to Anglicanism.

Bozzi Granville finally retired from the navy in 1813.  His old friend William Hamilton’s brother was the brother-in-law of Robert Farquhar, the Governor of Mauritius, and Robert’s father, Sir Walter Farquhar, was the Prince Regent’s physician.  With various letters of introduction, these connections gave him entrée into the medical establishment.  On Sir Walter’s advice, he studied at La Maternité in Paris, before setting himself up as a specialist physician in women’s diseases in London. 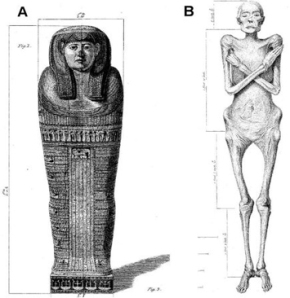 Irtyersenu, from the press release of the Royal Society, 1 October 2009

Granville was a man of science.  He was friendly with the chemist John Dalton, and for many years was the secretary to the Royal Institution.  In 1825 he conducted the first autopsy on an Egyptian mummy, Irtyersenu, a woman of about 50.  Like the good gynaecologist he was, he identified her cause of death as an ovarian tumour, though recently Irtyersenu has been re-examined, and she is now thought to have died of tuberculosis.

We will never know how Stephen Maturin’s life might have ended – but Augustus Bozzi Granville lived a long and fruitful life.  He died in 1868, leaving a 2 volume autobiography which is the basis for almost everything we know about his life before he settled in England.  It is a thoroughly entertaining book – and very likely, I suspect, a work of historical fiction as vividly creative as anything that Patrick O’Brian ever wrote.

10 responses to “Was this the real Stephen Maturin?”