The President and the Barmaid

And I spent my soul in kisses, crushed upon your scarlet mouth,
Oh! My red-lipped, sun-browned sweetheart, dark-eyed daughter of the south.

With all the kissing and cuddling that’s been going on lately between Barack Obama and Julia Gillard, maybe it’s time to quote the words of another American President with a thing for Australian women.

I have heard several times in the last week that until LBJ came to Harold Holt’s funeral in 1967, no American President had visited Australia.  The truth is, Australia is a long way from the rest of the world.  Henry Kissinger is supposed to have said (though I can’t find hard evidence) that he had never visited Australia, because he had never been on the way to Antarctica.  So it is not surprising that world leaders didn’t visit Australia before the era of fast air travel.  Nowadays, of course, they all find an excuse to come, especially during the northern winter.

But in fact, one American President spent a considerable time in Australia and left his mark on it.

Herbert Hoover arrived in Kalgoorlie as a young geologist straight out of Stanford University, in 1897.  Hoover worked for a British mining company, Bewick, Moreing & Co, who sent him to the Western Australian goldfields as a manager.  Kalgoorlie was a rough mining town – some would say it still is.  Because of its isolation, miners needed long pockets, so most mining was in the hands of companies with capital, rather than individuals.

One of Hoover’s jobs was to scout out new prospects for his employers.  One likely investment was a small gold mine in the desert begun by 3 Welshmen.  They had acquired a mining licence for the site, but didn’t have enough capital to develop the mine.  He persuaded Bewick, Moreing & Co to buy the mine and put him in charge.  Sons of Gwalia (Latin for Wales) became one of Australia’s most lucrative gold mines. 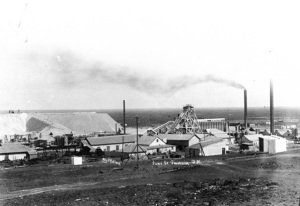 The 1890s was a depressed decade, and Hoover ran a tough management regime.  He cut wages and increased hours.  He also raised ethnic tensions in the workforce by employing immigrant Italians – ‘the rivalry between them and the [other] workers is no small benefit’, he wrote, because it made united action more difficult.  This was a very American tactic, not often used in Australia.

During his years in Kalgoorlie, Hoover allegedly wrote a poem to a Kalgoorlie barmaid.  The Australian Dictionary of Biography doubts the story, and so does William J. Coughlin (2000).  Such a shame – the poem is quite gloriously awful, but apparently can’t be traced any earlier than 1933.

Hoover worked in Western Australia for 2 years, then returned to America to marry Lou Henry, who also graduated in geology from Stanford, in 1899.  They left the next day for China, where Hoover continued to work for Bewick, Moreing & Co, travelling widely, but based in Tianjin.  He visited the company’s Australian mines again in 1905.

Barack Obama’s visit to Australia, and his speech to the Australian Parliament, were all about America’s attitude to China today.  [see Rory Medcalf, ‘Buildup Down Under’, in Foreign Policy, 17 November 2011]

Obama is one of the first American Presidents with an Asia-Pacific background: he was born in Hawaii and spent part of his childhood in Indonesia.  But in fact he follows in the footsteps of Herbert Hoover, who went to university in San Francisco, and spent years working in Australia and China.  Hoover and his wife learned Mandarin while living in China, and apparently used it as their private language in the White House, to keep their conversations secret from the servants.

Unfortunately, Hoover’s name is now ineradicably associated with the onset of the 1929 depression.  Let’s hope, for all our sakes, that’s not the case for Barack Obama.  Obama apparently speaks Indonesian, too.  I’m not sure, though, that our very own Daughter of Gwalia speaks Welsh – let alone Mandarin.

Note: I’ve written before about Australia’s relations with China and America – here.

William J. Coughlin, ‘Into the Outback: How the young Herbert Hoover made his name – and fortune – in Australia’, Stanford Magazine, 2000.

5 responses to “The President and the Barmaid”