How should we deal with racist language?

If you go to iTunes to download a copy of one of Joseph Conrad’s classic novels, you will find it listed under the name The N—— of the Narcissus (1897). Apple’s antennae are very sensitively tuned when it comes to the use of what Americans call ‘the N word’.

There has recently been a controversy over racist terminology at ABC Radio. A sports commentator, Warren Ryan, was suspended for using the racist term ‘old darky’, and has now quit because he refuses to apologize for something that was taken out of context. He says he was quoting from Gone with the Wind. You can read the details here.

As a completely dis-(and un-)interested bystander regarding anything football-related, I know nothing about Ryan, except that in general I think sports commentators should act in a civilized manner and keep their traps shut as much as possible, but the story does raise the issue of how we deal with racist comments that are not our own, but those of another generation.

Margaret Mitchell hardly bears comparison with Conrad, and Ryan’s explanation is a little self-serving, but there has been some thoughtful comment following Ryan’s suspension about the problem of censoring classics on the basis of their racism. (And by the way, The Nigger of the Narcissus is not racist, but a sympathetic portrayal of a West Indian black sailor.)

Where racism is concerned, of course, sport is a repeat offender. The ‘Nigger’ Brown Affair bubbled along for many years. In the 1960s, the Toowoomba Sports Ground named a grandstand after Toowoomba’s first rugby league international, Edwin Stanley Brown (1898-1972), known as ‘Nigger’ Brown. In the early 20th century nicknames were both common and predictable: redheads were ‘Bluey’, tall men were ‘Shorty’, Millers were ‘Dusty’ – and Brown ended up as ‘Nigger’. It wasn’t an innocuous choice, but it was of its time. It was much less ‘of its time’ by the 1960s when the grandstand was built – and when it was finally pulled down in 2008, Toowoomba sensibly buried the nickname at the same time. 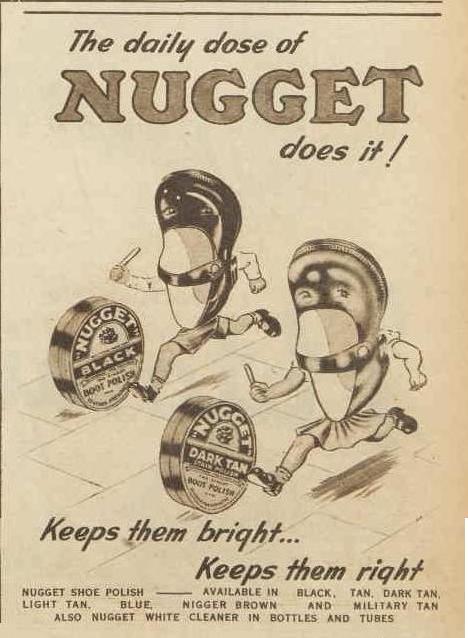 Advertisement for shoe polish, Australian Women’s Weekly, 22 May 1948, from Trove

The problem is to deal with racist words and images in a civilized way, not offending people, but being honest about the original intention of the document. Which brings me to a quite different story.

The State Library of Queensland has just digitized nearly 1000 coloured covers and illustrated pages from The Queenslander between 1899 and 1939. It’s a fascinating opportunity to browse the covers, as in a newsagent, but also to link through to the complete (black and white) contents, available through Trove. It’s a wonderful resource – and it shows the deeply embedded racism of the period.

How do you handle this racist undertone? The library’s response seems to be to ignore it completely. The Queenslander’s favourite illustrator was Garnet Agnew (1886-1951). Most of his pictures are cheerful images of Queensland people in characteristic pose, rugby players included. They are bright, light, and no doubt helped to sell the magazine, but some are much darker than this. Many of them deal with Aboriginal and Islander people, but there are others too. Here, for instance, is the cover from 3 November 1927. 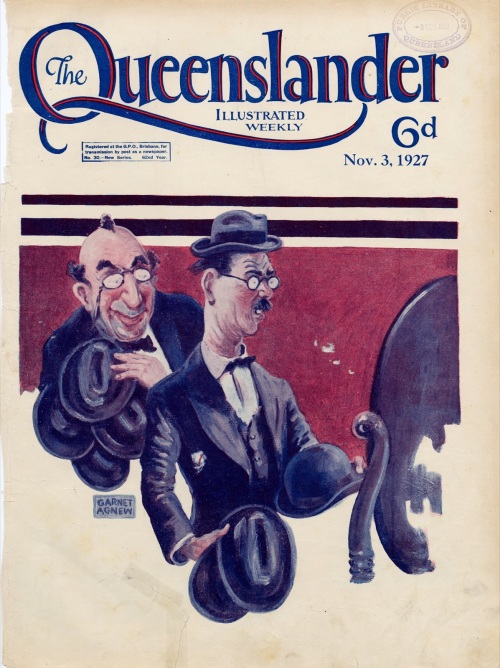 And here is its catalogue description:

A sales assistant helps a man try on hats in front of a mirror. Both men wear glasses and appear to have poor eyesight. The customer is not happy with the very small hat sitting on top of his head.

And that is all. The cataloguer has tagged it ‘Hats’ and ‘Customers’ – but not ‘Jewish’ or ‘Anti-Semitic’, which seems to me the most important feature of Agnew’s image of this salesman in the schmutter trade, with his long nose and curly black hair.

Of course, cartoonists deal in stereotypes, and these can become harder to read as time passes. I think, but I’m not sure, that this picture from 1928 is a cartoon Irishman. The checked neck cloth in particular is suggestive. Perhaps, though, the signs that are obvious to me are harder for a young cataloguer at the State Library to read.

When I was in the Balkans last year, local people kept talking about ‘the Gypsy problem’ – and no PC rubbish about calling them Roma. I couldn’t see a problem. In fact I couldn’t see any Gypsies at all. It was only when they were pointed out that I learned who the young people selling us raspberries were. Racism really does lie in the eye of the beholder, and I come from a country without ‘a Gypsy problem’. Unlike Apple when it comes to the N-word, my antennae are blunt when it comes to the G-word.

In the end though, perhaps the historian’s loss is society’s gain. Anti-Irish, anti-Catholic bigotry isn’t an issue in Australia today. Anti-Semitism isn’t a big issue either – replaced, sadly, by other forms of racist and religious prejudice. It seems a pity, though, that a future researcher, looking at attitudes towards Jews or Irish in Queensland, won’t find these images – or only if they search on ‘Hats’.

Note: Many thanks to the State Library of Queensland and Louise Denoon for alerting me to this wonderful new resource.

6 responses to “How should we deal with racist language?”