Julia Gillard has been in Central Australia to talk to Aboriginal leaders.  No doubt most of these meetings took place in air conditioning, but she promised to visit several town camps as well.  So we can expect to see images of the Prime Minister and her advisors, looking awkward and uncomfortable, sitting in the dust with some selected long grassers.

Tony Abbott went to Alice Springs in April, and the photos show him, awkward and uncomfortable, hunkered down on the floor of a humpy, engaged in painful small talk.

Politicians are on a hiding to nothing really.  They always look awkward and uncomfortable in these places, because they are – and not just because no government of either complexion has ever satisfactorily healed the gaping wound which is the relationship between Aborigines and the rest of Australia.

They are also awkward and uncomfortable because they are.  Unlike their hosts, comfortably sitting cross-legged on the ground, most of us, including politicians, haven’t sat that way since we left kindergarten – though all that cycling probably means that Tony Abbott’s pelvic floor is in better condition than most.

There are various ways of categorising human beings, not all invidious.  One that we don’t often consider, but which is surprisingly potent, is the great divide between those societies where people sit on the ground / tapa cloth / tatami mat / Persian carpet and those who sit in chairs.

These patterns of behaviour are learned in early childhood.  I went to kindergarten in Amsterdam in the 1950s.  In a cold climate, we spent most of our time indoors, sitting on small chairs at small tables, playing in fairly sedentary ways, with paper and scissors and glue.  We sat at a table to eat our sandwiches, cut in tiny squares, with a fork.

Then I came back to Australia, where children my age had spent years at kindy, cross legged on the ground, eating their sandwiches with their fingers.  At 5 years old my fate was already sealed.  Forget the lotus position; I couldn’t even sit cross-legged like the other kids.  I don’t remember, but I’m guessing that they wriggled more than I did, as they gradually adjusted to life in a chair, at a desk, after years sitting on the ground.

No doubt everywhere, but particularly perhaps in Central Australia, there are people who move comfortably between chairs and the ground, but for most of us, it is hard to adjust.  So Gillard and Abbott will wriggle uncomfortably on the ground – and perhaps Aboriginal children will wriggle more at their school desks than their peers.

This divide goes back a long way.  The Egyptian elite used chairs; in the Fertile Crescent most people did not. In his excavations in Ur, Leonard Woolley studied the burial of an elite woman, Queen Shub-Ad.  From the skeleton, Woolley thought she had spent most of her time in a kneeling position, perhaps a similar style to the Japanese seiza.  China was using chairs by the 12th century, but in Japan the change from kneeling on the ground, or (for men only) sitting cross-legged, is only now taking place.  Sometimes the change goes with new technology.  Traditionally, tailors sat cross-legged to sew by hand, but when sewing machines arrived, they moved on to chairs.  No doubt computers have had the same effect.

For the Greeks and Romans, a chair indicated high status, just as it did in medieval Europe: kings sat on thrones while their courtiers stood; bishops sat on the cathedras that gave their name to cathedrals.  But you don’t need a chair-based culture to show high status.  In the Middle East, everyone sits on the ground to eat, but the most important person will certainly be served the best food at the meal.

When people from each side of the sitting divide meet, the result can be strange.  I’ve seen this interface at work, waiting for a plane at Dubai airport.  Courtesy of Emirates airlines, the wealthy of two separate worlds cross paths here, some waiting in family groups, sitting on the ground, some on the seats – all equally jetlagged.  The airport offers 2 sets of toilets too, recognizing that sitting in chairs has given us westerners shortened Achilles tendons that make squatting for long periods difficult!

Politicians struggle when they are confronted with the sitting divide.  They want images that show themselves in a position of command or camaraderie, but neither is easy, when your lower back is killing you, whether you are on the ground of a shanty town, or seated in a kindy chair, as John Howard was when – briefly – spooked by Mark Latham in 2003. 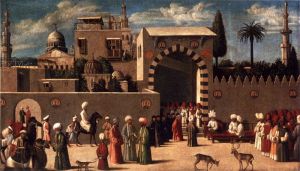 There is a wonderful image of such a meeting across the sitting divide from 1511, when a Venetian artist painted ‘The Reception of the Venetian Ambassadors in Damascus’.  There is no doubt who is receiving whom.  The Venetians are led by a man in red with a black cap, while behind him huddle a bevy of black-coated ministerial aides.  In front of them sits the Mamluk viceroy of the Ottoman Empire, in a magnificent headdress, with two white clothed underlings behind him.  All three are seated cross-legged on a raised dais, which has been covered with a fine carpet.

Anonymous, Reception of the Venetian Ambassadors in Damascus, 1511, detail. From Wikimedia Commons

Padded seating such as this eventually became the item of furniture we call an ottoman.  Checking in the Oxford English Dictionary that I’ve got this definition right, I find an illustrative quote: ‘Draw up the ottoman; so long as you have a spine, rely upon it.’  In their dealings with Aborigines, I hope one day our politicians find the spine to sit down comfortably with them and cross the divide.

2 responses to “Our Sedentary Ways”