The Currency of Corruption

The Labor Party has now lost 2 shadow ministers since the election on 2 July, which suggests a high level of carelessness. Nobody seems to know yet just why Stephen Conroy decided to leave, but the reasons for Sam Dastyari’s resignation are hideously clear – accepting money from a Chinese donor to pay a $A1600 travel bill – and 2 bottles of Grange. He listed these in the donor register as ‘two bottles of wine’ and says he subsequently gave them to a charity auction.

It’s all a bit sordid, not least because the sums involved are so small. It reminds me a bit of that line in A Man for All Seasons, when Thomas More learns that Richard Rich has given perjured evidence against him in return for the job of Attorney-General for Wales: ‘It profits a man nothing to give his soul for the whole world – but for Wales, Richard?’

One can only hope that Andrew Leigh is finally getting an appropriate salary, which he missed out on when, for arcane factional reasons, the size of the shadow ministry blew out to 31.

Political gifts are curious things, and you can waste a pleasant hour at the moment googling the name of any Australian politician and the word ‘Grange’. In a depressing number of cases, up pops a gift bottle. The most famous recent examples are Dastyari and, before him, the NSW Premier Barry O’Farrell, who says he forgot all about the gift, but nonetheless resigned when his thank you note popped up. Other recipients, though, include Peter Costello, who received ‘a 6-pack’ in 2008, Kevin Rudd in 2006, and just maybe Tony Abbott in 2015/6.

Women don’t seem to get bottles of plonk in the same way – Julie Bishop and Tania Plibersek seem to be cleanskins, and the top item under ‘Julia Gillard + Grange’ shows her visiting the Milford Grange Retirement Community before the 2011 election – which is either admirable or sad, depending on your point of view.

Penfolds Grange, for anyone living on another planet, is widely touted as Australia’s best wine. It is expensive, but it can always be described, on the politician’s register of gifts, as ‘a bottle of wine’, just as a Rolex can be just ‘a watch’.

Naturally it is very expensive, especially the older bottles, so Penfolds has designed a dinky little website to let buyers type in the date they want – here. O’Farrell’s bottle of Grange dates from 1959, his birth year, but sadly the system crashes if I enter my birthdate, which dates back earlier than the first Grange production. Sigh.

Unlike cash, a political gift is not intended to buy a politician outright, but to sweeten him up, to remind him – as he sips his wine or glances at his watch – of good old so-and-so. Often, the gift is an investment in the future. A strategic gift to a rising star in the opposition – Kevin Rudd, Tony Abbott, Sam Dastyari – is like laying down a bottle of good wine to drink at some time in the future.

There are fashions in political gifts, as in other things. Sometimes cash is king. Lawyers still wear robes with a feature known as the ‘money bag’, a thin strip of material trailing down the front of the gown and the remainder of a ‘pocket’ on the back. Once upon a time – say, in Thomas More’s time – the lawyer would turn his back and pull on the strap to jingle the bag, ‘reminding’ the client that payment was due. English wigmakers (and professional spoilsports) Ede and Ravenscroft say the money bag is just the remnant of a monastic hood.

Usually though, the idea is to gently remind the recipient of a mutually advantageous friendship.

In the early 19th century, the Macarthur family perfected the art of the political gift. In 1804 John Macarthur’s fortunes turned when the Colonial Secretary, Lord Camden, authorized a land grant, which he named Camden Park. Keeping sweet with Lord Camden and his secretary George Watson-Taylor was important, so when his son Edward sailed to England in 1808, he took with him a menagerie of Australian wildlife to distribute strategically to potential allies. 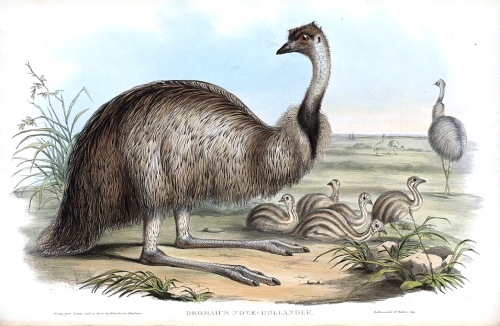 Emus from John Gould, The Birds of Australia

Lady Castlereagh (wife of the Colonial Secretary) got two emus. It’s unlikely the poor birds survived for very long at Mount Stewart, the Castlereagh estate in Northern Ireland. A black swan and a goose also survived the voyage to be presented to Lady Camden – since Camden was no longer in office, she didn’t rate a matched pair. But they missed out on a pair of bronze-wing pigeons because Watson-Taylor thought ‘that too many presents at one time would overdo the business’ – and possibly coveted the birds himself, for Edward gave him ‘a very handsome present in the bird way’. ‘I have made several [presents] to different people’, Edward added, ‘and have not parted with all yet’.

More than a decade later, the Macarthurs were still greasing the wheels. George Watson-Taylor finally got a pair of black swans in 1821, and two years later John Macarthur Jr sent the junior minister at the Colonial Office, Robert Wilmot Horton, a number of kangaroo skins to make into boots: ‘It resembles dog skin, but is much more durable’.

Boots and swans; wine and watches. Fashions change but the objective remains the same – a valuable and exotic gift that will remind the politician of his friends, but if necessary can remain virtually anonymous. When Robert Wilmot Horton climbed the stairs of the Colonial Office in his kangaroo-skin boots, he could revel in their uniqueness, but nobody else would know. It was just a friendly gift, after all, without a hint of corruption. The gift of shares in the Australian Agricultural Company, on which he turned a quick profit of £12,000, were perhaps another matter.

References: Edward Macarthur’s gifts are discussed in S.Macarthur-Onslow, Records of the Macarthurs of Camden (1914)
John Macarthur Jr.’s gifts are recorded in the Macarthur Papers (Mitchell Library) and the Willmot-Horton Papers (Derbyshire Record Office).