Most people I know ignore the business pages of a newspaper – but for those in the know, there is as much vanity, violence and family tragedy in the business pages as anywhere else in the paper – and that’s just Gina Rinehart and family. For sheer vanity and potential for future mishaps, Rupert Murdoch’s succession plans compare favourably with those of King Lear. 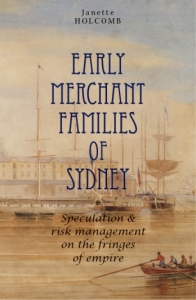 All this turmoil generated plenty of paperwork. In her new book, Early Merchant Families of Sydney, Janette Holcomb takes us in a series of forensic biographical chapters through the early history of Sydney’s mercantile elite, from Robert Campbell from the house of Campbell, Clark & Co, who arrived from Calcutta with a cargo of spirits in 1798, to Ben Boyd of the Royal Bank of Australia, who arrived from England with a cargo of credit in 1842. END_OF_DOCUMENT_TOKEN_TO_BE_REPLACED

William Paterson and the Battered Wife

It’s disconcerting to come across someone you know in an unfamiliar context.  You discover that your colleague in the bank is a part-time football hooligan (it happened to my sister’s friend), or the nice tenants in your rental property turn out to be members of Ananda Marga (it happened to me, at a time when the sect was allegedly responsible for various acts of political terrorism).

This happens with historical figures too.  One of the endless fascinations of biography is the way that people keep breaking out of the boxes we put them in.

I’ve just been reading Wendy Moore’s biography of the Countess of Strathmore.  In the way of many books today, the long title – Wedlock: How Georgian Britain’s Worst Husband Met his Match (2007) – gives you most of the plot.  END_OF_DOCUMENT_TOKEN_TO_BE_REPLACED