Talking about the weather

No, I’ve no real idea what this means either – though I presume that it told generations of English shepherds whether to leave the sheep in the fields or bring them in to shelter.  Weather lore is a bit like that: a useful mnemonic for specific local purposes that doesn’t translate satisfactorily once you move to another place.

So what do you do when you do move to another place?

We’ve been having a lot of weather in Australia lately.  Towns from Roma to Forbes have been flooded, the rivers are running, and the 19th century myth of an inland sea sounds more plausible than usual.

We all now know that the reason for the wet weather is La Niña, El Niño’s soggy sister, but it is only in the last few decades that scientists have began to explain what Chilean fishermen have recognised in outline for hundreds of years.

The Southern Oscillation describes a pattern where the Pacific Ocean alternates between periods of warm and cool surface temperatures, which in turn affects air pressure and wind patterns across the Pacific – and perhaps well beyond.  During El Niño events it is dry in eastern Australia and wet on the American Pacific coast; the reverse occurs with La Niña.  Here in Australia we are currently being drowned by La Niña.

When European settlers arrived in Australia, they knew they had to learn about the local weather.  The governors were naval or military men, so they were used to keeping a meteorological record.  Over time, the new arrivals expected that this record of temperature, wind direction and rain, would give them a basis for predicting the weather – though weather forecasting in the late 18th century was still at the ‘red sky at night’ level of accuracy.

The meteorological journal of William Dawes, 1788

But they had no idea that they were dealing with a climate system that swings so dramatically, and so slowly, between wet and dry seasons.  Wikipedia suggests an oscillation of 5 years; the Australian Bureau of Meteorology suggests 3 to 8 years.  The truth is there is a great deal we still don’t know about the Southern Oscillation, but we do know it is highly variable.  It doesn’t tick regularly like a clock – or a pendulum.

The key figure in turning weather forecasting from an art to a science was Charles Darwin’s companion from the voyage of the Beagle, Captain (later Sir) Robert FitzRoy.  He did excellent survey work on the Beagle, received a gold medal from the Royal Geographical Society.  He was Governor of New Zealand from 1843-5, but was recalled for supporting the Maori against the settlers in their disputes over land.

In 1854, FitzRoy was appointed head of the newly established meteorological department in the Board of Trade.  Using the weather logs he persuaded ships’ captains and colonial observers to send him, he gathered together information on the weather, and collated this enormous pile of information into charts of winds and currents.  He came up with the idea – and the name – of ‘synoptic charts’.  Acting on his hunch that falling air pressure predicted stormy weather, he distributed barometers to ports around Britain.  They became standard in Australia, too.  He wrote The Weather Book: A Manual of Practical Meteorology (1863), available on Google Books here.

FitzRoy was probably always a depressive.  He invited Charles Darwin to join him on the Beagle because he recognized the need for a companion to talk to during the voyage – and how fortunate was that for the development of science.  Despite his successes, the problem didn’t go away, and in April 1865, FitzRoy killed himself by cutting his throat with a razor.

FitzRoy introduced the idea of forecasting to meteorology, but he always recognized the limitations of forecasts:

Prophecies or predictions they are not: the term forecast is strictly applicable to such an opinion as is the result of a scientific combination and calculation, liable to be occasionally, though rarely, marred by [various unexpected events] not yet sufficiently indicated to our extremely limited sight and feeling.  We shall know more and more by degrees. (The Weather Book, p. 171)

Thanks to FitzRoy, ships’ captains and port authorities began to collect data on air pressure and sea temperature, as well as the established categories of rainfall, wind and air temperature.  Thanks to FitzRoy, that data is now being used to study the Southern Oscillation – and we shall know more and more by degrees.

Next Wednesday, 2 February, is Groundhog Day.  Is there anyone, anywhere, who hasn’t seen the movie yet?  If so, do yourself a favour, take it out of the local video shop, and enjoy Bill Murray’s performance as the grumpy weather man who learns to be a nicer person by constantly repeating the same day until he finally gets it right.

The 1993 film has given Groundhog Day the meaning of something endlessly repeated – think ‘going forward’, or ‘a great big new tax’, or a whole election campaign, for that matter – but its initial meaning was a reference to the groundhog himself, Punxsutawney Phil, whose alleged ability to predict the weather provides the basic plot.

Punxsutawney Phil is one of a number of groundhogs/gophers/beavers across North America who perform this task, by coming out of their winter quarters on 2 February to check on the weather.  Counter-intuitively, a sunny day, which casts a shadow, is bad news, indicating that winter will continue for another 40 days, whereas if there’s no shadow, the weather will be milder and spring is on the way. 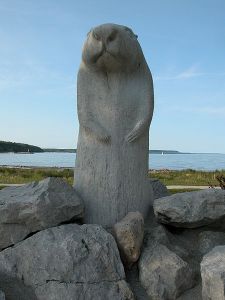 2 February is 40 days after Christmas.  In traditional Christian practice, the day is the festival of the Purification of the Virgin, when Mary, a good Jewish girl, went to the temple to be ritually cleansed after bearing a male child 40 days earlier, and to give thanks to God.

Feminists may baulk at the link between childbirth and pollution that this practice implies, but perhaps it made more sense in a world where post-partum infections were deadly and could be caught from exposure to the wider community.  A woman who survived these 40 dangerous days had plenty of good reasons to head to the temple to give thanks.

In Britain, 2 February was known as Candlemas, the day when the priest blessed the candles that would be used during the year ahead. The day was important as the last festival in the cycle associated with Christmas.  Together with St Blaise’s Day the next day, these days marked the passing of winter, the moment when spring might – perhaps – be finally on its way.

Hibernating animals were beginning to stir and, according to Emmanuel Le Roy Ladurie (Carnival at Romans), on St Blaise’s Day ‘the bear’s resounding fart of dehibernation celebrated the primordial rite of spring’.

This time of the year, then, was associated with hibernation and rebirth, and with the arrival of spring and the beginning of the agricultural year.  As the planting began, a reliable weather forecast was much needed. Punxsutawney Phil and his American mates come from a long European tradition of springtime predictions, often based on the same concept: sunny bad, cloudy good. An English poem, for instance, says:

Immigrant farmers brought the Candlemas traditions with them to North America, probably from Germany, and the first record of a predictive groundhog dates from 1841.

Unfortunately, if the Wikipedia entry is to be believed, Punxsutawney Phil’s record is not good, with an accuracy rate of less than 40%.  When geographically specific weather lore is transferred to a new location, it doesn’t work as well, or needs to be reinvented in some way.

And what about us, here in the southern hemisphere?

‘The North Wind doth blow,
And it will bring snow’

You’ve got to be kidding.  They’ve just announced another cyclone off the Queensland coast.

On weather lore in an Australian context, look at the Bureau of Meteorology’s website, Indigenous Weather Knowledge