Teredo – worms shall devour them

Places matter to people.  In my suburb, one of our best-loved places is the Shorncliffe pier.  Throughout the day, it is a place for tai chi and joggers, crab pots and fishing.  In the early evening, it is full of friendly walkers, with or without dogs.  People sprinkle the ashes of those they love from its railings, or use it as a backdrop for wedding photos.  It was recently used in a UK television ad available on YouTube here.

They used to say that Sandgate is 12 miles from Brisbane – or 13 at low tide.  It is a long way out to deep water, so early settlers could not get their goods – or themselves – from ship to shore without wading.  As the community grew, in 1865 they made plans ‘for the construction of a PIER or LANDING STAGE at Sandgate’.  This pier opened to the public in 1882.

From the start, the pier had a dual purpose, as a commercial landing stage, but also as a popular promenade.  Piers were a part of the tradition of beach ‘watering places’, growing popular amongst all classes by the mid-19th century.  They were destinations for city day-trippers who came by railway to enjoy a day at the beach, perhaps swimming, but probably just strolling along the waterfront, and enjoying the concerts, food outlets, Punch and Judy shows and other commercial activities that took place on and around a pier. 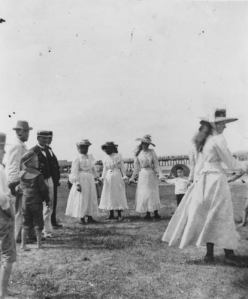 Our pier followed the social model of British piers such as the West Pier at Brighton (1866) and the Cleveden Pier on the Severn (1869), both built at much the same time.  People came by coach, and then by rail (1882) to enjoy a day at the beach.  But while the British piers were mainly built of iron, wood was much cheaper in Brisbane, so our pier is wooden.

A few weeks ago, council inspectors found marine borers in its timber pilings and the pier has been closed until further notice.  Since then there have been petitions and a rally, a local newspaper campaign and a lot of promises.  A local election next Saturday has raised the temperature. END_OF_DOCUMENT_TOKEN_TO_BE_REPLACED