Phar Lap and the Australian Dictionary of Biography

The Sydney Morning Herald this morning carries an obituary for Ruth Frappell (née Teale).  From 1968, Ruth Teale worked for the Australian Dictionary of Biography where she appears in their ‘Authors’ Roll of Honour’ with 56 articles.

I didn’t know Ruth Teale personally, and it is a long time since I read her book, Colonial Eve: Sources on Women in Australia, 1788-1914 (1978), but various friends and colleagues of mine have worked for the ADB, and I know how important and under-valued such work can be.

Thank you all, for where would we be, as historians, without ready access to dictionaries of biography?  Today I use the ADB and the British Oxford Dictionary of National Biography every week, and American, Canadian and New Zealand equivalents fairly frequently.

So it is ironic but inevitable that, when I cleared out my office earlier this year, and gave away most of my books, nobody wanted my hardback copies of the ADB.  They are available on-line now, and all the more valuable for the added searching opportunities that gives.  (Though while the ADB is freely available on the web, the DNB is only available behind a pay wall.  Ready access is a relative term.)

In their electronic versions, these dictionaries of biography are forever works in progress, updated and corrected as necessary, but it wasn’t ever thus.  Each new hard copy volume of the Australian Dictionary of Biography arrived with an erratum slip, listing a little collection of mistakes from earlier volumes, which the conscientious owner was meant to hand correct.  I remember one such slip said, of some long forgotten sibling to the great man:

For ‘died young’, read ‘lived to a ripe old age in Orange’. 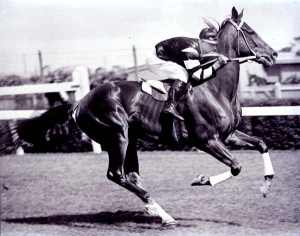 Melbourne Cup is only 2 weeks away, and not coincidentally a new film, The Cup, has just been released, based on the 2002 Melbourne Cup.  And Black Caviar won her 14th race from 14 starts to equal Phar Lap’s record (and has her own website).

So here, for those who don’t know it already, is Phar Lap’s ADB entry – a great parody written by Barry Andrews for the first Making of Sporting Traditions conference in 1977, later reprinted in the Australian History Association Bulletin, and then in Sporting Traditions (1988).  The National Centre of Biography at the ANU has put it on line here.

LAP, PHAR (1926-32), sporting personality, business associate of modest speculators and national hero, was born on 4 October 1926 at Timaru, New Zealand, the second of eight children of Night Raid and his wife Entreaty, nee Prayer Wheel. The family had military connections, including Carbine and Musket (q.q.v.) although Raid himself had emigrated to Australia during the first World War.

A spindly, unattractive youth with chestnut hair, Lap was educated privately at Timaru until January, 1928, when he formed a liaison with the Sydney entertainment entrepreneur Harold Telford. With Telford, Lap moved to Sydney and established premises in the suburb of Randwick, a number of short term (distance) ventures were unsuccessful, although after James E. Pike (q.v.) commenced employment and Telford became a silent partner, the business flourished. A small, dapper man who dressed flamboyantly in multi-coloured coats and hats, Pike’s nervousness caused him to lose weight before each speculation with Lap; yet their affiliation lasted for over two years and proved beneficial to hundreds of Australian investors.

The most successful years were between 1930 and 1932, when the business expanded into Victoria, South Australia and Mexico. Pike and Lap received numerous awards for services to the entertainment industry, including an MC in 1930; they shared with Telford a gross taxable income of over 50,000 pounds. This income was substantially increased, however, by generous donations from several Sydney publishers, including Ken Ranger and Jack Waterhouse (q.q.v.)

Early in 1930 Lap journey to North America to strengthen his interest there; Telford, who disliked travelling, and Pike, who had weighty problems to contend with, stayed behind. Tall and rangy, known affectionately as ‘Bobby’, ‘The Red Terror’ and occasionally as ‘you mongrel’, Lap died in mysterious circumstances in Atherton, California, on 5 April, 1932, and was buried in California, Melbourne, Canberra and Wellington. A linguist as well as a businessman, he popularised the phrase ‘get stuffed!’ although owing to an unfortunate accident in his youth he left no children.

I. Carter, Phar Lap (Melbourne, 1971), and for bibliog; information from J. O’Hara and T.H. Mouth; inspiration from anon. ADB contributors.