A service will take place at Westminster Abbey this Thursday, 12 May, to mark the birthday of Florence Nightingale.    The service features ‘the Procession of the Lamp’: student nurses from the Florence Nightingale School of Nursing bring her lamp down the central aisle, then pass it to the Dean who places it on the High Altar:

May this lamp signify our sacred calling to serve the sick and injured, which was heard and answered by Florence Nightingale, passed on from generation to generation, and received with gladness and humility by us today.

Jesus said, ‘Like the lamp, you must shed light among your fellows, so that, when they see the good you do, they may give praise to your Father in heaven.’

Nightingale’s lamp is treated as a sacred relic; her pet owl, Athena, is stuffed and on display at the Florence Nightingale Museum.

Last year, on the centenary of her death, one of the chapels in Westminster Abbey was dedicated to her, the only one not dedicated to a saint.  If Anglican England hadn’t abandoned saints centuries ago, it seems fairly likely that by now she would be a saint.  Not bad for a woman from a Unitarian family, whose faith, while strong, was decidedly unorthodox.

The trouble with saints is that they are often so deadly dull.  In fact, Nightingale’s life was much more interesting than the hagiography suggests.  She lived to be 90, and had an impressive post-Crimea career.  She studied statistics and invented an early form of pie diagrams. 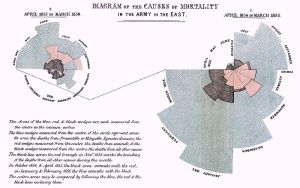 She used a loyal coterie of important men to push through reforms, not just in nursing, but in public health generally.  (They in their turn no doubt used her celebrity to promote their own agendas).  In other ways she was old fashioned: she opposed women’s suffrage, and never accepted the germ theory of disease.

In 1860, St Thomas’s Hospital set up a nursing school to train nurses according to the Nightingale method.  These Nightingale Nurses then spread through Britain and the Empire, imposing their ideas of hygiene and order, uniform in their views, uniformed like secular nuns.  In 1868, a group of nurses led by Lucy Osburn arrived in Sydney to impose this new regime.

Florence Nightingale’s celebrity dated from 1855, when both The Times and the Illustrated London News, covering the Crimean War, began reporting on her work at the army hospital in Scutari.  It was an embarrassingly mismanaged war, so the nurses were a good news story amongst so many bad ones.  Florence was young and good looking, she had money and family connections, and she had a charming name.  Forget all those late Victorian Great Aunt Florences; in the 1850s her name was associated with a songbird and a great Renaissance city. 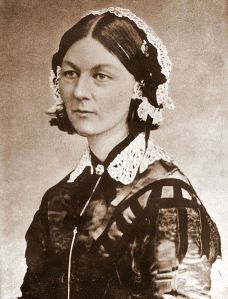 Bathsheba Ghost had none of these advantages, but half a world away in colonial Sydney, she managed to claw her way up the greasy pole to become a well paid, respectable figure as the Matron of the Sydney Infirmary, dying 2 years before Lucy Osburn and her nurses arrived to overhaul the old system.

We know very little about Bathsheba Ghost.  She doesn’t rate a mention in the Australian Dictionary of Biography, not even the ‘missing persons’ volume that made an effort to redress the balance of the original volumes, which neglected so many women.  Most of the records of the Sydney Infirmary from her years there have disappeared, but the historian Judith Godden has done a great job in putting what flesh she can on the basic skeleton of Bathsheba’s life.

In 1838, Bathsheba Ghost was tried at the Old Bailey for receiving stolen goods, and sentenced to 14 years transportation.  She was 29 years old, married to a jeweller and the mother of a 4 year old son.  She arrived in Sydney in March 1839, right at the end of the convict era.  She got her ticket of leave (which allowed her to work as a free woman) after 6 years of servitude, and a conditional pardon 2 years after that, in 1847.

She probably began work at the Infirmary at about that time, or even earlier, for in 1864 she was commended for her 20 years service.  In 1852 she was appointed Matron of the Sydney Infirmary and Dispensary, on a salary of £80, plus board and lodgings, later rising to £100 in 1854 and finally £120.  When she died in 1866, after a long illness but still nominally in charge, she left the hospital £100 in her will.

Nobody remembers Bathsheba Ghost now.  She comes from a time before nursing was celebrated, and indeed, she was more housekeeper than nurse, managing the domestic staff, supervising the cleaning and bedding and meals.  Although Bathsheba was literate, her family was not, so no letters exist to show us her inner life.  Even her maiden name – Dominick, Doming, Dominie or Dominey – is uncertain, depending on what some official wrote down.  (Though I find it interesting that her brother’s name was Solomon.  A brother and sister called Solomon and Bathsheba sound rather like twins, or at least the children of unusually imaginative parents.)

Two years after Bathsheba’s death, the Nightingale nurses arrived in Sydney.  Lucy Osburn was appointed Matron at the Sydney Infirmary, but she called herself ‘Lady Superior’ rather than Matron because, she told Florence Nightingale:

There are matrons here who left their country for their country’s good. My predecessor Mrs Ghost was one they are not always sober often have difficulty in writing their names & like poor Mrs. Ghost though with a child or two up & down the country have no claim to the title of Mrs. Matron therefore signifies here a woman who could not get a situation as a servant.

Poor Mrs. Ghost.  Judith Godden makes it clear that there is no evidence that she drank or was promiscuous, she had a perfect right to call herself ‘Mrs’ – and her salary of £120 was not significantly less than the £150 that Lucy was paid. 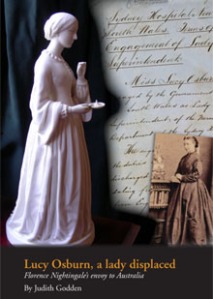 A Service to Celebrate the Life of Florence Nightingale in the centennial year of her death, 2010