Food prices are rising at the moment.  Everyone is feeling the pinch, but for the vast majority of us in Australia, it’s not a matter of life and death.  And while we may grizzle in the supermarket or on talk back radio, we’re not rioting in the streets about the price of bananas – you can put a mandarin in the kids’ lunch boxes instead.

Others don’t have the luxury of choice – of foods or of governments.

Rising food prices recently helped to trigger the Arab spring, just as they played a role in the French – and many other – revolutions.  Revolutionary ideas are all very well, but ‘a hungry belly has no ears’, as a Turkish proverb has it.  In other words, people who are hungry won’t – and can’t – listen to reason.  But they make a fine back up mob for those who do.

Food security, which has always been a source of anxiety for the poor, is becoming a global concern again.  The term may be new – but the concept is as old as Famine, one of the Four Horsemen of the Apocalypse.

A few staple foods – bread or rice, and cooking oil – account for most of the diet of the urban poor, and most of their disposable income.  This limited diet makes minor perturbations in price far more critical than they are in the developed world.  Whether in 18th century France or in 21st century Egypt, when food prices rise, people starve.

One of the key components of the French Revolution was the rising cost of bread.  At a rough estimate, about 80 percent of the income of workers in Paris was spent on food, and about 80 percent of that food was bread.  These figures are roughly comparable with those for the urban poor across the Middle East. 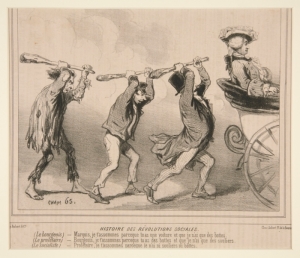 So when successive harvests failed and prices rose, tensions rose too.  Revolutions tend to occur in the spring and early summer, when heat drives people out of their tenements into the streets, and when food is scarce ahead of the next harvest.  Bastille Day was 14 July.

Food riots have a long history.  In pre-industrial Europe, they followed a traditional pattern.  The riots were – and are – an urban phenomenon. A dispersed rural population is less likely to riot, because you need a critical mass of people to form a mob.  There were surprisingly few food riots in rural Ireland during the Potato Famine, though mobs sometimes rallied to fight evictions. 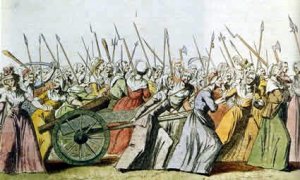 The Women March on Versailles, from Wikimedia Commons

Women usually played an important role in food riots, too.  In traditional societies, feeding the family is women’s work – so rallying against rising food prices was women’s work too.  Besides, while the authorities might try to contain and control a riot, most ordinary soldiers baulk at shooting women – they have mothers too.  It was women who marched out to Versailles to bring the King and Queen – ‘the baker and the baker’s wife’ – back to Paris.

In pre-revolutionary France, the authorities knew that the people were hungry, and that high bread prices meant trouble.  But what could the state do in the face of civil disobedience?  The traditional responses were (and largely still are): bring in food from elsewhere, bring in price control on staples, and crack down hard on the opposition.

These solutions are only temporary expedients.  They didn’t work for Louis XVI in the end – or for Hosni Mubarak.  Price control can only work if farmers are subsidised, or they have no incentive to continue production.

The Roman Emperors kept the urban mob at bay by subsidising bread (and circuses) but at a ruinous cost, relying on grain shipments from Egypt, ironically enough.  Egypt has no surplus grain these days, and effectively there is no ‘elsewhere’ from which to import food.  Today individual states have little control over food supplies, for markets are global and food prices are set by supply and demand.

And food supplies are under pressure again: the heat wave in Russia last year – and a heat wave now threatening the harvest in America this northern autumn.  Grain is also used as animal fodder, to meet the growing demand for meat in those parts of the world where incomes are rising.

Then there is biofuel.  Making alcohol from sugar cane trash may be a sensible use of a wasted resource, but in America and Brazil, most biofuel comes from corn.  French aristocrats fed grain to their horses while the people starved; biofuels similarly prioritise transport over people.

In the long term, strong states kept a reserve of food for emergency distribution.  In the centre of Florence is the church of Orsanmichele.  Inside, the church looks like a normal Renaissance church dedicated to St Michael; go outside, and you can see that the church has an upper level, a hidden granary where Republican Florence stockpiled the city’s grain, discreetly protected by God from rats and its always hungry workers.  When supplies ran short, and prices rose high enough to trigger violence, the city rulers could release grain to keep prices within limits.  This month the Chinese released stockpiled supplies of pork, on the same principle, after pork prices rose over 50 percent.

But it takes a strong government to hold back food in this way – and an honest one as well, that won’t sell the stockpile for armaments, as has happened in the Horn of Africa.  Sometimes the rats come in a human form.

Note: a version of this post appeared in The Weekend Australian on 6 August 2011.  As a result, I received the following comment from Prof Lindsay Falvey:

Dear Marion
Your piece in the Australian about Food Prices and such related matters as historical and current food-induced riots is apposite. The global situation is precarious. Two central issues that international agencies charged with addressing food security (that’s real food security – very basic often unappetising food necessary to sustain life in famines where Western food surpluses may not be available) form the basis of my recent book. I mention it since it opens with an historical picture – a free pdf version is available at
Also, Julian Cribb’s excellent book, ‘The Coming Famine’ and his blog aim to motivate some responsible action.
Thanks for raising the matter in a public forum
Lindsay Falvey
(C/-Former Dean and Chair of Agriculture, University of Melbourne, 3010 Australia, or Life Fellow, Clare Hall, University of Cambridge, Hershel Rd, Cambridge UK.)

[I would also add another good book on the history of hunger: David Arnold, Famine: Social crisis and historical change (1988) – Marion]