But he was also an exhausted man, and by the standards of his day already an old man. END_OF_DOCUMENT_TOKEN_TO_BE_REPLACED

Otto von Habsburg died last week.  A good Catholic, he left behind 7 children, but nevertheless, he was effectively the last of the Habsburgs – the last, at least, who was born in a palace back in 1912.  Otto von Habsburg was the son of the last Austro-Hungarian Emperor, Karl I.  He was a nephew of Archduke Franz Ferdinand, whose assassination at Sarajevo in June 1914 precipitated the First World War.

There have been many obituaries – in The Guardian, The New York Times, the BBC – but my interest was tweaked because, for many years, I taught first year students European history.  I spent one week looking at the Habsburg dynasty, and I always ended the lecture by showing them this photo. 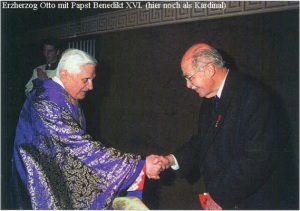 The students knew the man on the left was the Pope, Benedict XVI, but not the elderly gentleman on his left, Otto von Habsburg.  He was a Member of the European Parliament for many years, a supporter of European unification, and played an important role in the collapse of the Iron Curtain across central Europe in 1989.  In the last couple of years of teaching, I would check each year to see whether he was still alive, before showing my slide – it seemed increasingly unlikely, but now I know that yes, Otto von Habsburg WAS still alive, and in the end, he outlasted my lectures.  Good for him.

Historians argue with each other about almost anything, but it is probably not in dispute that the Habsburgs were Europe’s most important dynasty – as well as one of the most long lasting (the Danish monarchy is older, and still going strong).  At the height of their power, under Charles V and his son Philip II in the 16th century, they ruled an Empire – the first – on which the sun never set, with territory in the Americas, the Philippines and India, as well as very sizeable chunks of Europe.

So who were the Habsburgs?  Some time during the 10th century, as various families competed like cats in a sack for power and territory, one family emerged in what is now the Swiss canton of Aargau.  They took the name Habsburg, which may come from Habichtsburg, meaning Hawk’s Castle – which gives an inkling into their modus operandi, as one family amongst many petty warlords.  In the story of William Tell, the ‘Austrians’ who were his enemies were Habsburg tax collectors.

The Habsburgs prospered, gradually pushing east into Austria, picking up territory in skirmishes with the neighbours, until in 1452, the head of the family was elected Holy Roman Emperor as Frederick III, effectively the overlord of German lands, broadly defined.  The title carried a lot of prestige, but the Emperor had no power to tax his subjects, to pay for either an army or a bureaucracy.  However Emperor and Pope were generally seen to have a special relationship, with the Emperor expected to defend Christendom (whatever that was).

The Habsburgs had a talent for marrying heiresses.  In an age when rulers led their armies into battle, there was a fairly high mortality rate amongst male rulers.  Add the problem of a newly virulent syphilis, which seems to have returned to Europe with Columbus in 1492, and which caused infertility when it didn’t kill, and girls fairly often inherited when their parents failed to produce a male heir.

The Habsburg strategy was most spectacularly successful in the case of Mary of Burgundy.  Mary was the only child of the last Duke of Burgundy, Charles the Bold, who died in battle in 1477.  Burgundy was a vast inheritance, including some of the richest cities in Europe in what are now Belgium and the Netherlands.

Bernhard Strigel, Emperor Maximilian, Mary of Burgundy, their son Philip, and grandchildren Ferdinand, Charles and Margaret.  Mary was dead by the time this was painted.

From the various enthusiastic suitors for her hand, Mary chose Frederick III’s son, Maximilian of Austria.  They had 2 surviving children, Philip and Margaret, before Mary died in a riding accident, aged 25.  Meanwhile in Spain, another heiress, Isabella of Castile, married her cousin Ferdinand of Aragon in 1469.  They had 5 surviving children, one son Juan, and daughters Isabella, Juana, Maria, and Catherine.

In a complicated diplomatic arrangement, the two couples arranged a swap: Juan and Juana of Aragon and Castile would marry Margaret and Philip of Habsburg, cementing relations between north and south, and forming an alliance against the French.

But the curse of male mortality intervened.  Both husbands died young.  Juan was only 19, and it was darkly rumoured that too much sex, too young, had contributed to his early death.  Philip’s marriage lasted rather longer, and produced 6 children, including 2 sons, Charles and Ferdinand, before he too died, at 28.  So a series of dynastic accidents led to the convergence of vast territories in the hands of a single ruler, his eldest son Charles (1500-1558).

In 1555, Charles V, Holy Roman Emperor, King of Aragon and Castile, Duke of Burgundy and God alone knows what else, divided his enormous inheritance between his son, Philip II, who took Spain and Burgundy, and his brother Ferdinand, who took the Habsburg heartlands in Austria, and the elective title of Emperor.   The two lineages were known as the Spanish Habsburgs and the Austrian Habsburgs.

Both of them continued to play the marriage game.  Charles had married his cousin, Isabella of Portugal, and Philip subsequently inherited through his mother when the last king died.  Philip also married (amongst others) his cousin Mary Tudor, heiress of England, but she died without issue and the crown passed to her sister Elizabeth.  Meanwhile Ferdinand inherited Hungary through his wife, Anna of Bohemia and Hungary, following her brother’s death in battle against the Ottomans.

Marriage, it seemed, was a great strategy.  But it had its drawbacks.  The Habsburg strategy was to accumulate territory and sovereignty by tracking down foreign heiresses to marry.  If no heiress was available, then they kept things in the family by marrying cousins or, at least twice, uncles married nieces – Philip II’s fourth wife was his niece, and they had 5 children.

There were already genetic problems in these families.  Charles V’s mother is known in Spanish as Juana la Loca – Juana the Mad.  Retrospective diagnosis is impossible, but Philip II reacted violently when his son, Don Carlos, showed similar symptoms of insanity.  (The opera Don Carlos gives a highly coloured and dubious version of events).

Meanwhile Maximilian of Austria carried a less serious, but more specifically genetic abnormality, a prognathism that is commonly known as the ‘Habsburg Jaw’, where the lower jaw protrudes beyond the upper, and the teeth don’t meet properly.  His children and grandchildren showed the same problem, and you can see it in the group portrait above.  They seem to have been happy to be painted in profile, highlighting the jaw, but it cannot have been comfortable.  In serious cases, people have difficulty chewing and talking, and tend to drool. 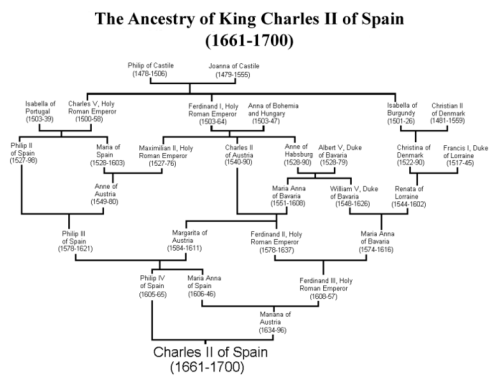 The Austrian Habsburg line ended more genteelly, with another heiress.  In 1740 the Emperor Charles VI died leaving only a daughter, Maria Theresa.  Like Queen Victoria a century later, Maria Theresa’s position was too powerful for any husband to subsume her inheritance.  Instead her husband Francis of Lorraine became Emperor, the family name changed to Habsburg-Lorraine, and the dynasty continued more or less unchanged – until World War I.

Otto von Habsburg came from this line.  After a tumultuous childhood, he settled in Germany, where he became a Member of the European Parliament for many years.  He was a strong supporter of a united Europe – after all, he came from the family that once ruled a good part of it – and he never gave up his claims to his various thrones.

In other ways, he was spared the worst aspects of his inheritance, for he lived to a healthy old age, dying just short of his 99th birthday.  Good genes, perhaps.