The Lamington goes to War

It’s hard to imagine anything more innocuous than a lamington.  Sweet and sticky, an iconic national sugar hit, they remind me of Girl Guide lamington drives of my youth.  Today, the pool of mothers prepared to devote a day to dipping squares of sponge cake into chocolate gloop, then rolling them in desiccated coconut, has mysteriously dried up – I wonder why? – and as a fundraiser, the lamington drive has been replaced by the sausage sizzle.

Lamingtons are named after the second Lord Lamington, who was Governor of Queensland from 1895 to 1901.  According to the entry in Wikipedia – and yes, even the lamington has a Wikipedia entry – Lord Lamington has a French cook, Armand Gallad, whose wife came from Tahiti, and hence his inspiration to roll a chocolate-coated petit four in coconut.   There is a minority theory about the cake coming from the town of Lamington, in Scotland, but the lamington can’t have been invented much earlier, because the key ingredient, desiccated coconut, didn’t exist until the late 1880s.

Coconuts, of course, have been grown across the tropics for thousands of years – for so long, in fact, that their original place of origin is uncertain.  The tree is immensely valuable: the oil is used in cooking, and was once burnt for light; the meat is eaten directly, or mixed with water to make milk or cream for cooking; the husks are an efficient fuel; and the shells are used as bowls and utensils.  The fronds are woven, and the tree itself will eventually be cut down for timber.

Sailors carried coconuts with them as an emergency source of food and liquid, and coconut water is given to babies with diarrhoea.  Until the nut is opened, the liquid is sterile, so can be used as an emergency glucose supply, or even replace plasma in blood transfusions.  So a grove of coconut trees benefits the whole community in many ways. 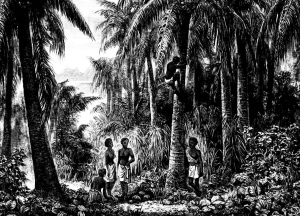 But most of these benefits are based on access to your local neighbourhood trees.  In the late 19th century, European colonists in the Pacific began to grow coconuts in plantations, on an industrial scale.  It was a major investment, for it takes about 7 years before a tree begins to bear fruit, but when they did, the nuts were harvested, split, and dried in the sun.  The resulting oily coconut meat is copra.

Copra was pressed to produce coconut oil, an important raw material in various industrial products such as soaps and cosmetics.  But it was also used for explosives for engineering and military purposes.

I’m probably being tracked by the CIA at the moment, as I’ve been searching the web for early recipes for nitro-glycerine.  Not surprisingly, these are hard to find (though I did find a rather scary site from the Philippines with a recipe for a coconut bomb).  Until petroleum jelly became readily available and cheap, coconut oil was used as a natural source of glycerine.  This was used in the production of nitro-glycerine, which in turn was used in dynamite (patented 1867 by Alfred Nobel), and later other explosives such as cordite and gelignite.

Coconut oil accounts for about 70% of copra, leaving about 30% fibre, which was made into animal feed, until, in the late 1880s and early 1890s, several separate companies began to experiment with making desiccated coconut for human consumption.  In August 1891, The Queenslander reported that the Pacific Desiccating Company had begun to produce desiccated coconut in Suva, Fiji, and was exporting it to Australia.  ‘The indigestibility associated with the kernel of the cocoa-nut is completely eliminated in the process of manufacture,’ the article reported – though some might disagree, even today. 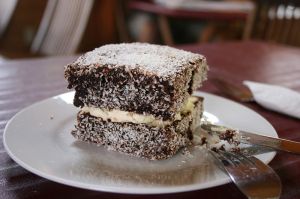 So the invention of the lamington must have occurred at about this time, and it may well be that it happened at Government House, Brisbane.  The timing is interesting.  In the 1890s, as Europe moved inexorably towards World War I, coconut plantations in the Pacific colonies were gearing up the export of copra: from Samoa and New Guinea to Germany, from Tahiti and New Caledonia to France, from Fiji and the Solomon Islands to Britain.  And desiccated coconut, which was essentially a by-product of the arms race, was turned into cakes and confectionary.

Twenty years later, Australian mothers invented a new delicacy, when they pulled out their supplies of flour, rolled oats, golden syrup and desiccated coconut, and baked Anzac biscuits to send to their sons at Gallipoli.