Audrey Tennyson was the wife of Hallam Tennyson, Governor of South Australia and later Governor General of Australia. Her letters to her mother back in England are full of tales of high life in Adelaide and Melbourne around the turn of the 20th century. The problems of celebrity, it seems, aren’t new. Audrey Tennyson’s clothes were frequently scrutinized in the local press, and in 1902, she complained that her gowns ‘have all been described in the newspapers in every detail, [so] they are useless & I cannot wear them’. [30 September 1902] She was constantly trying to ring the changes:

Ask Mrs Lane how I can do up my purple velvet… She might put in anything that would do for doing up gowns, & also what sleeves are worn for the evening… I want something to eke out my old evening gowns at the endless concerts & plays. The smart morning gowns are chiefly for the Races… [25 January 1900]

She was particularly worried in the months leading up to the Duke and Duchess of Cornwall coming out to open Federal Parliament in 1901. (No, not Wills and Kate, but the earlier ones who later became George V and Queen Mary). The situation was complicated by the need for everyone to wear mourning following the death of Queen Victoria. 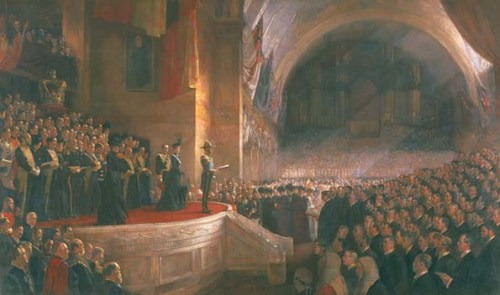 Tom Roberts, Opening of the First Parliament of the Commonwealth of Australia by H.R.H. The Duke of Cornwall and York (Later King George V), May 9, 1901, 1903. Only the carpets and the Cardinal are red, because everyone was in mourning.

Will you tell Mrs Lane I am larger round the hips, I think, & send her new measurements & also the lengths of the skirt at the side seams, as they are always inclined to be short at the sides.  My bust & waist are smaller than they were, but that I don’t mind for I can always take them in & I may get fatter again… [17 February 1901]

Despite her requests, the following year she complained that Mrs Lane had

sent me a grey gown I never ordered & it is so tight round the hips it all gapes at the fastening & can’t be altered, so I have had to send that back… It really is a little trying, is it not? [30 September 1902]