Thanksgiving and the Battle of Brisbane

Growing up in Brisbane as a baby boomer, I always knew something about the Battle of Brisbane.  It was part of the rich soup of stories we grew up in: the impact of the Pacific War, the rationing, the American presence and how this sometimes led to fights between Australian soldiers and the Americans –  ‘overpaid, oversexed and over here’. 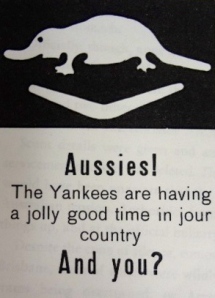 Some of the stories were funny.  Here’s an American account of one:

Many Australian troops returning home resented the Americans.  Dell Brooks [a submariner from the Seahorse] encountered that resentment in a theater in Brisbane showing Walt Disney’s 1942 animated classic, Bambi.  In one segment, Bambi cries out, “Mommy, mommy, where are you?” From the balcony came a voice, “She’s out with some damn Yank; where do you think she’s at?”