What do I do with the Egyptian mummy?

I’ve been going gangbusters writing my book lately. This is why my blog posts have tapered off recently – sorry – but there are some important advantages in staying in the Zone, without any interruptions.

When I have a concentrated spell of writing, rather than fitting it in around other obligations, which is the natural condition of most university teachers (and most women, for that matter), I find that I make connections that I might have missed if I was working my way more slowly from chapter to chapter.

As usual, I’m wrestling with the agony of what to leave out. I’ve always felt that the clearest difference between an antiquarian and a good historian lies in their ability to stick to the wider perspective without getting sidetracked by fascinating trivia.

Biography gives the writer a little more leeway: odd facts can illuminate a personality, and they add colour and movement to a life. But odd facts can be a distraction, a sequence of one-damn-thing-after-another anecdotes, and they have the potential to distort the narrative if it relies entirely on the accident of what documentary evidence remains. Trivial facts need to be odd, as in occasional, not just odd.

So what do I do about the Egyptian mummy? Sadly, I think it belongs in the Kill Your Darlings file – but I would love to be persuaded otherwise.

In 1820, Walter Stevenson Davidson (the subject of my biography, if you are coming late to the party) went home to Britain on leave from his business selling opium in China. He took the ‘overland route’, the fast route favoured by travellers without the patience to sail from India right around the Cape of Good Hope. They took one ship to the Red Sea, then travelled overland, usually to Alexandria, where they took a second ship for the rest of the journey.

The overland route was a well-organized and well-beaten track, and groups of travellers usually went overland in convoy, with plenty of local servants to deal with their voluminous luggage. This route brought a lot of English and Scots into contact with Egypt for the first time – generating a demand for souvenirs on a grand scale. 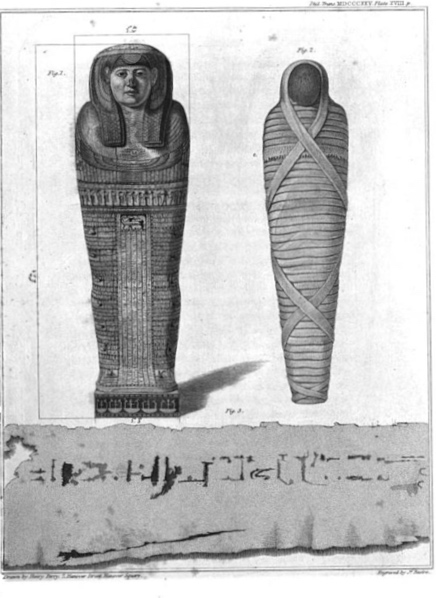 Walter Davidson travelled with a friend, Thomas Coats, and in February 1820 they visited Thebes, where they each bought a mummy – as you do.

He purchased a mummy from the excavations near Thebes, at Gournon, in February, 1820, selected out of a dozen which he opened, as the best preserved. It proved to be that of a male. It was quite dry; the hair and teeth were most perfect, the former being very long, in great profusion, and smoothly combed down. The body contained only a large quantity of gum, and there was no flesh, or very little of it, on the bones. Every part was brittle. It was enveloped in cotton bandages to a great extent, and was contained within two cases. [Granville, pp.24-5]

Now, what on earth do I do with this story? It is in no way central to Walter’s life, and would interrupt my account of the events that brought him back to Scotland just then to deal with the aftermath of his father’s death. It would probably give a modern reader the wrong idea anyway: what is he doing wasting time sightseeing in Thebes when he should be hurrying back to look after the family?

Time is a relative concept, of course, but it would take a long exegesis to explain that in 1820, even travellers in a hurry had lots of time on their hands, hanging around waiting for porters or resting their animals – camels? mules? Both human and animal beasts of burden were important, because these travellers did not travel light. I understand why they couldn’t fit everything into a 20kg. suitcase, but how on earth do you get a couple of mummies home?

Thomas Coats later married Walter’s sister – I’ve mentioned this here – and gave his mummy to the Literary Society of his home town of Newcastle-on-Tyne. I’ve no idea what happened to Walter’s mummy. It is hard to imagine it gracing his living room, but who knows?

I’d love to include the story of Walter’s Egyptian mummy in my book, but I’ve no idea where to slot it in. It has no wider significance – unless I can, perhaps, use it to illustrate the commodification of human beings that was part of the 19th century imperial project. That’s a bit tortuous really – but it is a great story.

Note: Thanks to Simon Peers for first alerting me to the story of WSD’s mummy.
A.B. Granville, An Essay on Egyptian Mummies; with Observations on the Art of Embalming among the Ancient Egyptians (London, 1825), is available on Google Books here.
Granville is another of my Dead Darlings – I’ve written about him here.