In July 2013 I went on a river cruise along the lower Danube, from the river port of Giurglu in Romania to Budapest in Hungary. It was a fascinating trip through the Balkans only a few years after the conflicts there had finally ended.

Vukovar water tower, destroyed in 1991, kept as a symbol of the siege today.

One day our boat stopped at Vukovar, the Croatian river port that was under siege by the Serbian remnants of the Yugoslav National Army (JNA) for 87 days in 1991, at the beginning of the Balkan War. Parts of the town remain a pockmarked ruin of bullet holes, but everyone was flying flags that day, just 2 weeks after Croatia joined the European Union.

From Vukovar we took a bus 15 kilometres to Osijek. This town was Roman, Hungarian and Turkish, before it was rebuilt as a Habsburg garrison town in the late 17th century, with Vauban-style walls and bastions designed to withstand cannon fire. 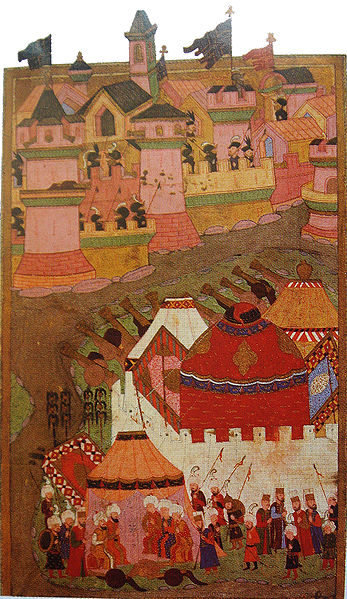 Siege of Vienna by Ottoman Forces, 16C. Note the cannon. From Wikipedia Commons

Travelling up the Danube River, I was constantly reminded that this was the route that Suleiman the Magnificent took when his forces laid siege to Vienna in 1529. Vienna didn’t fall, and the siege was lifted in time for the Ottoman Turks to retreat back down the Danube as winter set in, although they left most of their cannon behind in the muddy river flats. The Turks tried to seize Vienna again in 1683, after which the frontier between Catholic and Muslim Europe stabilized, with garrison towns like Osijek marking the border.

A large Catholic monastery (with a population, these days, of 4 monks) is a reminder that this marked a cultural and religious border as well, between Catholic and Orthodox Christians these days, but once also between Christians and Muslims.

In fact this river valley between the Balkan and Carpathian Mountains has been a highway for armies for millennia. The Romans under Trajan marched east along the Danube to conquer Dacia. The Crusaders marched this way too. So too did ideas, art, language and religion, making the Balkans a mass of frontiers where many fault lines converge.

A river cruise must be about the most luxurious form of soft tourism, and I know I am very fortunate I can travel this way. I have the money, the time, and above all, the passport and return air ticket, that give me the privilege of easy entry into the Schengen states of Europe.

This became clear one early morning. I’m an early riser, unlike most people on holiday, so I was sitting in the lounge drinking tea and writing emails around 6am, when an unexpected announcement came over the PA system. Everybody, but everybody, was ordered to the lounge, because the Hungarian immigration authorities insisted that they needed to check every individual against the photo in their passport. Until then, our passports were kept at the desk so that we were not inconvenienced as the boat sailed upstream – from Romania – to Bulgaria – to Serbia – to Croatia. Hungary, though, was different.

A sleepy, shambling crowd of over-indulged tourists, we queued for our passports. I was lucky to be showered and dressed. Most people were in dressing gowns or tracksuits, with wet or bed-head hair, many showing the after effects of too much good food and wine the night before.

The authorities checked us all against our photos and gave us back our passports. Now we had reached Hungary, the eastern edge of the Schengen states, we would not need our passports for the rest of the journey, not even those staying on the ship as far as Amsterdam.

Later, at breakfast – strawberries, smoked salmon and bagel (and if I had wanted it, freshly squeezed orange juice and champagne) – someone told me the whole affair was just for show, to give an illusion of fairness, a veneer of equity covering the hard reality of our privileged status. Other immigration officers would be checking for stowaways below decks, checking for ring-ins amongst the crew and the innumerable workers who changed our sheets, cooked our meals, and scrubbed our bathrooms.

What struck me at the time was the name of the port where the Hungarian authorities came aboard to check our papers – Mohács. In 1526, the Ottoman Turks won the Battle of Mohács. It was the watershed moment in European history, marking the most westward extent of Muslim penetration into central Europe. The Hungarian king Louis was killed on the battlefield. Most of Hungary was incorporated into the Ottoman Empire, leaving Louis’s son-in-law, the Habsburg Emperor’s younger brother Ferdinand, to become king of a much-diminished Hungarian monarchy. The Ottoman-Hungarian border shifted again in 1687, when a second battle of Mohács resulted in the defeat of the Sultan’s army by the Habsburgs. This nondescript little river port was twice a pivot in world events.

What strikes me now, though, seeing the photos, watching the footage, of desperate refugees trying to make their way into Europe through Hungary, is that in the long term, national borders are fragile, impermanent things. Cultural and linguistic frontiers shift too, even more slowly, but geography is permanent. The lower Danube has always funneled the movement of people between Central Europe and the Black Sea – and beyond that, the Fertile Crescent. This is the route, after all, along which Neolithic farmers first brought wheat into Europe.

Only the exceptionally privileged do the journey by river these days.

3 responses to “Getting to Hungary”