Colonists in 19th century Australia always found it difficult celebrating Christmas at midsummer. The strangeness of coping with the Christmas festivities in hot weather is a common theme in their letters home.

Today, most Australians have adjusted. Christmas food is usually cold and relies on such seasonal specialties as prawns and mangos. But that leaves a gap that gets filled, often enough, with ‘Christmas in July’ celebrations – an excuse to turn on the oven, cook a turkey, and binge on mince pies and Christmas puddings. It is now a binge that has totally broken its links with either the Christian religious festival or the winter solstice festivals of pre-Christian Europe. 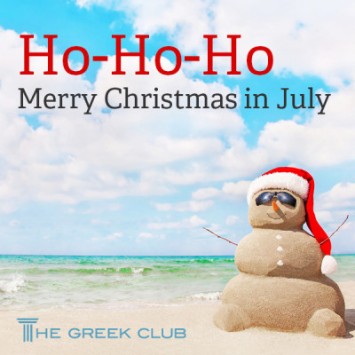 For the colonists, though, Christmas still had important religious significance, but it was also a way of keeping in touch with the rituals they had left behind, so they grimly celebrated the feast day, cooking and eating the heavy roasts and puddings they remembered from their British childhoods.

I was intrigued, then, to discover an early colonist thinking about moving Christmas to mid-winter as far back as 1827. James Macarthur, son of the more famous John, visited the Australian Agricultural Company’s headquarters at Port Stephens in December 1827. The place was still very primitive, with most people living in bark huts or tents, but understandably the new settlers made a big deal of Christmas Day. In his journal of the visit, James recorded:

We dined today on the Verandah where we kept up the good old customs of our ancestors, by being very merry & by eating plentifully of roast Beef & plum pudding – notwithstanding the difference in temperature between mid winter in England & mid summer in Australia a trifling variation of some sixty degrees of Fahrenheit….

A Corroboree of the Natives close to the Verandah finished the amusements of the day.

James had lived in England as a boy, but he was Australian born, so perhaps that is why he considered the possibility of moving Christmas to mid-winter:

I have always thought it would be a publick benefit (if practicable without heterodoxy) to change the eating and drinking part of this festival to a more temperate season of the year – At present too the Xmas holidays happen just at the Farmers’ busiest moment in the midst of harvest wool packing &c – Nothing can be more ill timed – In the month of June there is no operation of importance going forward & besides John Bull might then indulge as freely as at home without endangering his health.

I suspect that James was more concerned with getting greater profit from the workers than with endangering their health, but it is true that in the northern hemisphere, Christmas came at the slowest point of the agricultural year. In the southern hemisphere, there was more to do in December.

James was only musing to himself about the possibility of making the change – but farmers did once petition the South Australian government to change the Christmas holiday to April, so that their children could help bring in the harvest.

One response to “Christmas in July?”