Sticks and Stones, Words and Images

The sad events in Paris remind me, in a strange way, of Margaret Atwood’s observation: ‘Men fear women because they may laugh at them. Women fear men because they may kill them.’ The sheer asymmetry of violence is equally shocking in the case of Charlie Hebdo.

It also points to the fact that when there is an asymmetry of power, the weapon of the weak is very often laughter. Truth speaks to power through jokes and ditties and cartoons, and in a despotic state this may be the only way that it can. So, for instance, in colonial New South Wales, convict women shared jokes and gossip in the female factory about the men to whom they were distributed as servants – and sometimes as sexual partners as well. In Soviet Russia, the jokes were a way of dealing with the autocratic state and its crumbling bureaucracy: ‘We pretend to work for them, and they pretend to pay us’.

Much the same was true in the years before the French Revolution, when cartoons and scurrilous gossip about the absolute monarchy circulated widely. Cartoons aimed at Marie Antoinette were particularly scabrous, pornographic and cruel.

We drum into our children that ‘Sticks and stones may break my bones, but names can never hurt us’ – but we are teaching them a lie. Words – and images – can hurt a great deal, and teasing words are often designed deliberately to provoke an excessive response. The gadfly bites, and the dumb ox lashes out.

Jokes and cartoons about religion are particularly troubling. Years ago, I taught a first year course on European history. Each week I set a couple of contemporary documents for the students to read and then discuss in tutorials. One week, I had a visit from a student, a devout Roman Catholic, who was offended by one of the readings I had set, The Shipwreck from the Colloquies of Erasmus of Rotterdam.  Two men, Adolphus and Anthony, tell the story of a group of people panicking aboard a sinking ship:

Adolphus: There you might have seen a wretched Face of Things; the Mariners, they were singing their Salve Regina, imploring the Virgin Mother, calling her the Star of the Sea, the Queen of Heaven, the Lady of the World, the Haven of Health, and many other flattering Titles, which the sacred Scriptures never attributed to her.
Anthony: What has she to do with the Sea, who, as I believe, never went a Voyage in her Life?
Adophus: In ancient Times, Venus took Care of Mariners, because she was believ’d to be born of the Sea and because she left off to take Care of them, the Virgin Mother was put in her Place, that was a Mother, but not a Virgin.
Anthony: You joke.

Okay, so it’s aged a bit in 600 years, but in its day The Shipwreck must have been hilarious. And shocking. Erasmus was poking fun at the Catholic Church and its preoccupation with saints, good works, and deathbed bargains with God, all the issues that Luther would rail against in the Reformation – but Erasmus remained a good Catholic.

While I sympathized with my student’s position – and privately admired her bravery in making her complaint – I didn’t withdraw the reading, though in general I always tried to respect the sensitivities of my students. It was a valid teaching tool.

I guess we are all a bit inconsistent when it comes to matters of free speech. In Australia, most people today respect Aboriginal cultural sensitivity towards speaking the names of the dead, yet as a historian I sometimes find this a difficult rule to keep.

France today is proudly defending the right to free speech, yet France has banned the burqa from public spaces. Isn’t this an inconsistency?

Cartoons don’t always have to be funny. Sometimes their job is to focus the mind with a single, brilliant image. Many of the cartoons published in the wake of the massacre at Charlie Hebdo are like this. 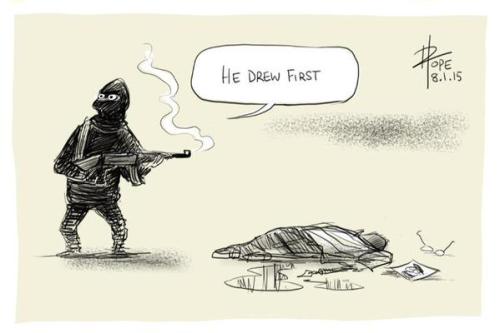 Cartoon by David Pope, posted on Twitter just after 1am because he couldn’t sleep

If I was a Muslim, I am sure I would find some of Charlie Hebdo’s cartoons equally cruel and offensive. The difference is that while I am glad that Pickering’s cartoons got no purchase in the mainstream media, I have no wish to kill him, just as most Muslims in France had no wish to kill the journalists and cartoonists at Charlie Hebdo.

It was a Frenchman, Voltaire, who allegedly said that ‘I disapprove of what you say, but I will defend to the death your right to say it’. Voltaire died at the age of 83, after spending the last 20 years of his life in Geneva safely out of the reach of the French church or state. The 40 year old Muslim policeman Ahmed Merabet died instead, pursuing Voltaire’s brave words.

4 responses to “Sticks and Stones, Words and Images”