I spent the afternoon of 11 November 1975, the day the Governor-General dismissed Prime Minister Gough Whitlam, marking essays on an earlier dismissal, when the New South Wales Governor, Sir Philip Game, sacked the Premier Jack Lang in 1932.

As a very junior tutor in Australian History, I had a desk in an outlying building well away from the hub of the History Department. By current standards, I had generous accommodation – a room on my own! – but also by current standards, I was isolated there: no internet, no phone, no tea room or gossip in the corridors. All I had was a deadline and a good 50 essays to mark and return before the students sat for their final exam. When I finally got to the bottom of the pile, in the mid-afternoon, I bundled them up and headed back to the department.

As soon as I entered the corridor of Forgan Smith – the original sandstone building at the centre of the University of Queensland – I knew something must be up: knots of people talking, radios switched on behind closed doors, notices pinned to those doors saying their occupants were elsewhere because of ‘reprehensible circumstances’. This was the phrase the opposition leader, Malcolm Fraser, had used to justify his decision to refuse to pass supply in the Senate.

Ebola – lessons from the past 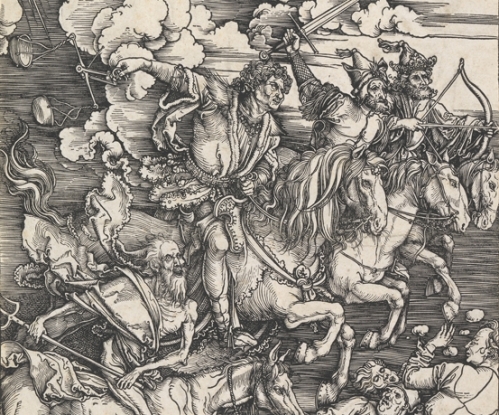 Albrecht Durer , The Four Horsemen of the Apocalypse (1497-8)

But sometimes a new disease turns up unexpectedly, like Ebola in West Africa right now, or smallpox in the Aztec Empire in the 16th century, or the Plague of Justinian in 541AD, the first recorded pandemic caused by the bacterium Yersinia pestis, better known from its second appearance in 1347 as the Black Death.

Historians are good are looking back and finding explanations, and epidemic diseases are most deadly when certain preconditions exist: poverty, poor hygiene, poor nutrition and over-population all make things worse. But sometimes, there are no preconditions, and it doesn’t do to blame the victims: the Aztecs were doing just fine until the Spanish arrived, bringing smallpox to a population that had no immunity to the disease. END_OF_DOCUMENT_TOKEN_TO_BE_REPLACED

During the 1860s, a trickle of English women went out to the colonies with loans from the Female Middle Class Emigration Society to cover their fares in Second Class – the middle class, between First and Steerage. They sent letters back to the FMCES when they repaid their loans, so we know quite a bit about them. Most of them were in their late twenties or thirties, so had missed the marriage market. Their best hope of economic security was to become governesses, a ‘white blouse’ occupation that required, above all, respectability and accomplishments. You might be lousy at teaching mathematics, but your manners must be beyond reproach.

A disaster occurred to one of them on the voyage out: several weeks away from Australia, she was walking on the deck when a sudden gust of wind blew her bonnet overboard. It was an appalling loss for her, because without a bonnet she couldn’t go up on deck or appear outside where she could be seen by the crew or the male passengers. Going bareheaded would be unthinkably bold.

I’m quite sure she could have bought or borrowed a shawl from one of the emigrant women in steerage, or rigged up a kerchief of some sort using a petticoat or bed linen, but a bonnet was important, because it showed her middle-class status. Instead she spent the rest of the voyage inside, unable to enjoy fresh air or sunshine or exercise until the ship reached Australia. END_OF_DOCUMENT_TOKEN_TO_BE_REPLACED 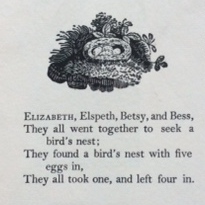 in Iona and Peter Opie, The Oxford Nursery Rhyme Book (1955)

I’m struggling with naming conventions at the moment – both the conventions of the late 18th / early 19th century when the characters in my book were alive, and the conventions I should use myself as a historian writing about them now.

The main character in my book is Walter Stevenson Davidson, whom I’ve discussed before (see tag). Walter was named after his mother’s brother, Walter (later Sir Walter) Farquhar, who was his godfather. Sir Walter’s wife Anne had the maiden name of Stevenson, so I’m assuming she was WSD’s godmother. I’ve come across this convention before, where godmothers’ godsons are given the woman’s surname as a middle name. So for instance Sir Walter’s daughter Eliza Farquhar was godmother to her cousin’s son, who was named George Farquhar Leslie.

Anne was a widow when she married Walter Farquhar in 1771, with 2 children, John and Elizabeth Harvie. John died young, but Elizabeth grew up and married Simon Halliday in 1787. As Elizabeth Halliday she features regularly in family correspondence and her husband went into partnership with one of Sir Walter’s sons. They were clearly well integrated into the Farquhar network.

So here’s the puzzle: Anne Farquhar went on to have 7 more children with her second husband, 3 boys and 4 girls, and the youngest girl, born in 1783, was named Eliza. I know that families used to recycle particular names, often reusing the baptismal name of a dead baby to ensure that a name survived if it had particular significance. And every genealogist knows, to their frustration, that a small set of first names are repeated endlessly within the family circle. But surely have 2 living daughters named Elizabeth and Eliza would be a touch confusing? END_OF_DOCUMENT_TOKEN_TO_BE_REPLACED

Next weekend, 11 and 12 October, Brisbane’s Open House weekend for 2014 is on. Last year I wrote discursively about Open House days here. The range of open houses and other buildings is wider this year, with a variety of reasons for their inclusion, not just historical, but for their architectural or ecological significance as well. And new buildings have been added, such as the ABC studios at South Bank.

Last year I spent a very happy day wandering around the city centre looking at public buildings. It was fascinating, particularly looking at ones that are not usually open to the public, like the Masonic Temple on Ann Street, designed by Lange Powell, my grandfather’s older brother, in the 1920s. This time I’m planning to have a peek at some of the open buildings in the suburbs, and maybe get a sense of Brisbane’s domestic architecture as well.

Highly recommended. For people in other cities, a Google search will bring up your particular Open House weekend – they are scattered throughout the year. 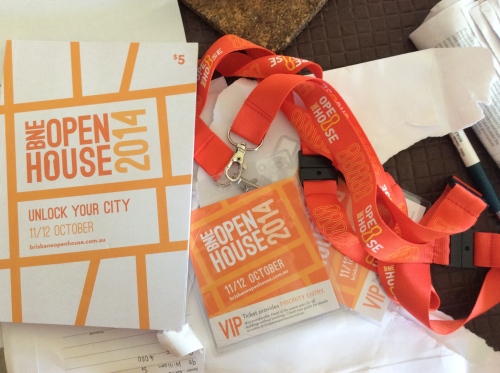 Many thanks to Open House Brisbane’s organisers, who sent me the booklet and VIP passes for the weekend. The very first payola I have ever received for this blog!