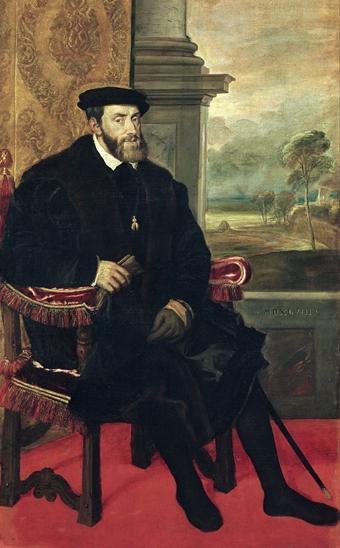 But he was also an exhausted man, and by the standards of his day already an old man. In his later portraits he looks worn out. At a time when rulers were expected to lead their troops in battle, a bad attack of gout interfered with his battle plans in a war against the French, and he lost Metz as a result in 1552. He retired to a small house (with between 50 and 60 attendants, so not that small) near the monastery of Yuste in Estremadura where he died 3 years later. 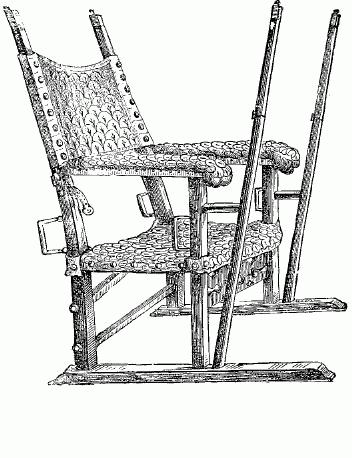 Charles V’s sedan chair, used to carry him around when crippled with gout at Yuste

Currently there’s a debate going on in Australia about old age: whether the old age pension should be raised from 65 to 70; whether people on superannuation are paying enough tax; how the disproportionate wave of baby boomers will be paid for by later generations. Above all, it’s a debate about what is old age?

We are living longer today, and for most of the time, we live in much less pain. In 2006 a group of Spanish doctors from the University of Barcelona examined Charles V’s fingertip, and found deposits of uric acid. He must have suffered horribly, and from an unusually early age. He first mentions an attack of gout in a letter to his sister when he was only 28. Gout is still a nasty condition, but it can at least be treated.

Charles died of malaria. That useful fingertip also shows evidence of Plasmodium falciparum, the malaria parasite. Malaria is still a terrible killer, but it is not longer much of a problem in the developed world, if only because its cause is known, and we can avoid mosquitoes using screens and repellent. Sadly, the wetlands of Estremadura are shrinking too.

Charles V was old at 55, but he had already been in harness for about 40 years. Nowadays not only do we live longer, but we enter the workforce much later as well. Charles became Regent of Castile at 16 and was elected Emperor at 19. He was just 21 when he had to deal with Martin Luther at the Diet of Worms, the same age as many of my undergraduate students, who also struggled to deal with Luther and the Diet of Worms – in 2500 words. Those students may one day have to work until they are 70, but they will live longer and less painful lives, and perhaps spend about the same time in the workforce as Charles V. I’m not sure that will be much of a comfort to them.

*For simplicity, most historians use the date 1555 for his abdication, though he divested himself of various bits of his empire over a couple of years, and it took several years for his subjects to confirm the changes, at least in Germany. His speech to the notables of the Netherlands in October 1555 gives the flavour of his handover.