Scandals don’t travel very well geographically. Some scandals take on a global dimension, and are instantly recognizable as such wherever you live – Monica Lewinsky’s dress definitely, a duck house built at taxpayers’ expense maybe, but I doubt if anyone elsewhere will really understand the significance of a New South Wales Premier thanking a lobbyist for giving him an expensive bottle of red wine.

Last week the NSW Premier Barry O’Farrell denied to the Independent Commission on Corruption that he was given a bottle of 1959 Grange 3 years ago. He said he didn’t remember receiving it and he didn’t put it on his gift register, but when confronted with his own thank you note, he resigned.

It’s not the most riveting of scandals, though the ICAC inquiry is currently revealing a lot about politics in New South Wales that reminds me of the remark attributed (or misattributed) to Otto von Bismarck that you don’t want to see how either laws or sausages are made, if you want a good night’s sleep.

Scandals don’t travel very well chronologically either. One generation’s scandal is another generation’s good joke. The Lewinsky scandal threatened Clinton’s Presidency, whereas when one of Queen Victoria’s ladies in waiting, Lady Dacre, called for help in the night because Lord Palmerston had broken into her bedroom to ‘seduce’ her, it angered the Queen – but it didn’t stop Palmerston subsequently becoming Prime Minister.

It’s Barry O’Farrell’s sad fate to rate as a good joke, because forgetting a bottle of 1959 Grange doesn’t pass the Pub Test. The man in the pub just doesn’t believe Barry could forget such a gift, given that the wine is estimated to be worth about $A3000. And this is despite the fact that, unless this wine was kept in ideal conditions, at 50 years old it was quite possibly a fairly forgettable drop.

However there is one aspect of this scandal that concerns me. Everyone, from counsel assisting the Commission onwards, keeps saying that the former NSW government was ‘the worst government since the Rum Corps’.

People have been comparing corrupt NSW administrations with the Rum Corps since the term was first invented, but this seems just a little unfair on the New South Wales Corps. 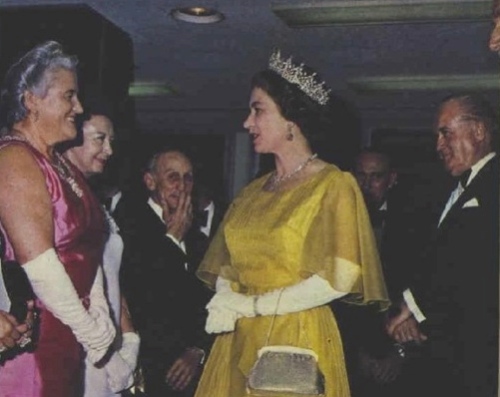 Case in point: the picture above shows the NSW Premier Sir Robert Askin (on the right) at the opening of New South Wales House in London in 1972. Sir Robert had been knighted by the Queen earlier that day and, according to the Australian Women’s Weekly (14 June 1972) the reception included the following:

Soldiers forming a guard-of-honor for the Queen were dressed in the uniforms of the New South Wales Corps, which served from 1789-1809. (This was the “Rum Corps,” so nicknamed because of its notorious trafficking in rum.)

At his death, an audit of his estate by the Australian Tax Office was unable to establish where most of Askin’s considerable fortune came from. By comparison, the peculations of the NSW Corps seem small beer – or wine or rum or the tipple of your choice.

The Corps was formed in Britain to serve in the new colony of New South Wales in 1789. It remained there until several of its leaders terminally blotted their copybooks by overthrowing Governor William Bligh in 1808. It was then recalled to Britain and renamed the 102nd Regiment of Foot.

Garrison regiments were also out of the mainstream at a time when Britain was at war, so opportunities for promotion – or death in battle, the two go together – were few. This meant that the officers naturally looked other opportunities to promote themselves through land grants and trading networks and control of the commissariat, the government monopoly that bought and sold grain to the settlers.

What isn’t at all clear is how big an issue rum played in all of this. The economic historian Noel Butlin long ago went to the trouble of tallying up the alcohol imports into Australia in the early 19th century in search of an answer. His conclusions are published under one of my favourite ever titles for an article: ‘Yo ho ho, and how many bottles of rum?’ Butlin argues that the amount of alcohol consumed wasn’t nearly as significant as earlier historians assumed, perhaps no more than the average Australian academic might consume in the 1980s.

The phrase ‘Rum Rebellion’, used to describe the mutiny against Bligh, may date from the temperance writer William Howitt in the 1850s, though it’s also implicit in the far less temperate Daniel Deniehy’s speech to the Legislative Council in 1854. Here he mocked conservative plans to establish a local aristocracy, suggesting that, for instance, James Macarthur (son of the rebel John) would become an Earl with a coat of arms emblazoned with ‘the rum keg of a New South Wales order of chivalry’.

In the early colony coin was in short supply so people used barter instead. A bottle of alcohol was valuable, and therefore a useful item of exchange, but many other commodities were used as well. Most damaging was the use of promissory notes, where people were effectively trading in options on the future price of commodities (mostly grain). Farmers still use such commodity options as a mechanism to smooth out their harvest sales – but in a new colony, with a new and uncertain climate and no reliable way of forecasting the harvest ahead and therefore the price of wheat, such mechanisms were very risky. People with their hands on the levers of power – like the officer corps – were in a better position to make the system work for them.

People with their hands on the levers of power are still in a much better position to make the system work for them, through control over the grant of mining leases, government monopolies and trading networks. Through ICAC we are currently getting an interesting ringside seat into the process of sausage making. What I guess none of us were really expecting was that bartering bottles of alcohol would still play a role.

N.G.Butlin, ‘Yo ho ho, and how many bottles of rum?’, Working Papers in Australian Economic History, 3, 1982.
The Life and Speeches of Daniel Henry Deniehy are available on line here
Michael Duffy, Man of Honour: John Macarthur (2003) suggests Howitt as the source of the term Rum Rebellion