A fellow blogger, Mirabelle Flint at Thrill Seeking Behavior, has nominated me for a ‘Most Versatile Blogger’ award.

The conditions for accepting this award are as follows:

1. Display the award logo on your blog.
2. Thank and link back to the person who nominated you.
3. State 7 things about yourself.
4. Nominate 15 other bloggers for this award.
5. Notify these bloggers of the nominations by linking back to one of their specific blog posts so they get notified back.

As Mirabelle points out, the whole thing is a bit like a chain letter – if 15 people nominate 15 people who nominate 15 people…. eventually the whole internet will be awash with nominations.  But the blogosphere operates largely on word of mouth, and there are too many good blogs that deserve a wider audience, so I’m very happy to accept my nomination, and obey the instructions.

So thank you, Mirabelle – and here’s the logo.

Now, 7 things about me that don’t already appear on my About Me page, in no particular order:

1. I’m a historian, but I came to history by a circuitous route.  At school I was in the science stream and I did my undergraduate degree in economics.  I’ve always been grateful for this breadth of training, and I try to draw on it in my writing.

2. When I was 16 I won a touch-typing course at the Ekka (Brisbane’s annual show).  So for many years I was the only person outside the typing pool who knew how to use a keyboard, which finally became useful when computers arrived on the scene in the 1980s.

3. I live in Sandgate, Brisbane, within sight of Moreton Bay, and the Pacific Ocean begins at the end of my street.  It’s a beautiful part of the world to live, but it does rather concentrate the mind where climate change is concerned.

4. I’m a political junkie, and have been since I cast my first vote in 1972, although I’ve never joined a political party. 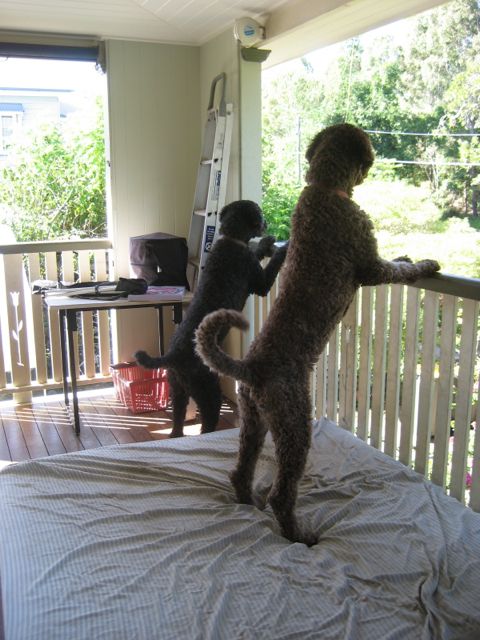 6. I’m a morning person.  I usually get up about 5.30, which is early even by Brisbane standards, and I find this my most productive time of day, although I write a lot of early drafts sitting in trains.

7. I love travel, even though for Australians, overseas travel inevitably starts with the endurance test of a long plane flight. I’m off to the Balkans for the first time in July.

Now for some recommended blogs.  These are not necessarily ‘versatile’, but ones I find interesting, useful, funny, or otherwise compelling.  There is probably a bias towards WordPress blogs, since I’m with WordPress, and pick up suggestions this way. They are in no particular order, except that I’ve put the obviously Australian ones first:

1. The Resident Judge of Port Phillip – The judge is John Willis, who served on the Melbourne bench in the 1840s, but also spent time in the law in Canada and the West Indies.  Janine writes about Willis and colonial history, but also writes the most insightful book reviews, occasionally relating to her research, but often fiction as well.

2. The Tiger’s Mouth – Kate writes about the history of Chinese Australians, looking particularly at women and children.

3. Stumbling through the Past – Yvonne writes on various topics, but particularly the history of education.  She is a great supporter of other Australian historians wrestling with blogs, twitter, and other new-fangled social media.  Thanks Yvonne.

4. Robert Ashdown Photography – Rob is a naturalist based in Toowoomba who produces the most glorious nature photography, while often writing more broadly about people and history, as well as fauna and flora.

6. My Unwelcome Stranger – I knew Denis 40-odd years ago, when we started as tutors at the University of Queensland about the same time. In 2010 he was diagnosed with a brain tumour.  Denis writes about family, childhood, life and the prospect of death.  He is warm and funny, as well as very brave.

7. Ozwords – A blog from the Australian National Dictionary Centre where various contributors discuss Australian words and slang; overall a lot of fun

8. Skulking in Holes and Corners – I’m not a military historian, but this blog is valuable for anyone interested in early modern Europe.  Jamel is a bit of an historical tech head who clearly loves tinkering with computer software, so this is also a good source of information on making maps, tables, graphs, etc.

9. Middle Savagery – Colleen subtitles her blog ‘Portrait of an Archaeologist as a young woman’, which probably says it all.

10. The Old Foodie – Janet’s blog, which has been up and running since 2005, may be the oldest in this list.  Her recipes, menus and stories of food in other times are fascinating, and I’m amazed by her diligence in putting out 5 posts a week for 8 years.

11. Sally Wilde: A blog about medieval crime writing – Sally has been writing a mystery novel based on a real event.  The Venerable Bede tells us that St Hilda’s father was murdered; Sally thinks she may have come up with a solution.  Now read on….

12. Dr Alun Withey – Alun writes about the history of medicine, particularly from a Welsh perspective.

13. Carmel Finley – all about the history of fish and fisheries from an environmental perspective, and therefore, unfortunately, sometimes very depressing.

14. A Fat Man’s Journey – Unlike most blogs, this one really needs to be read from the beginning onwards, to follow Mark’s journey from fat to (spoiler alert!) fit.

15. Dogshaming – this blog went viral at least a year ago, and doesn’t need any boosting from me – but when I need a rest from being serious, I come here for 5 minutes and leave refreshed.  It’s a pity I never got a photo of Toby covered in feathers, the day he tore a duvet to pieces.

Despite what the rules of the chain say, as far as I’m concerned, nobody on this list need feel obliged to follow up with a further 15 recommendations – though of course, it’s nice if you can and do.  I’m not into pyramid selling.

This entry was posted in personal and self-indulgent, Uncategorized and tagged blogging, history, history blogs. Bookmark the permalink.

3 responses to “A Chain Letter Continues….”