Talking to Asia in the 19th and 21st Centuries

The response to the new white paper, Australia in the Asian Century, just released by the federal government, has been underwhelming to say the least.  Which is a pity.

There’s little doubt that the 21st century belongs to Asia (however that murky geographic concept is defined), and most of the recommendations of Ken Henry’s panel seem worthy, if uncosted.  During the next century, most of the world’s middle class will be Asian, and Australia naturally wants to tap in – in trade, education, tourism and cultural exchange.

So far, so motherhood.  But one issue the report raised, and the PM emphasised in launching the report, has come in for a lot of criticism.  “All students will have continuous access to a priority Asian language – Chinese (Mandarin), Hindi, Indonesian and Japanese.”

Over the years there have other attempts to persuade our Anglophone kids to knuckle down and learn an Asian language, but apart from a few ambitious nerds (Kevin Rudd, anyone?) most high school students baulk at the difficulties, especially when their matriculation results depend on how they go in a variety of subjects.  Dean Ashenden nails the problem here – and goes on to point out that

To the extent that we do need Asian-language speakers for business or other purposes, why on earth get schools to produce them?  We’ve already got them.

But if teaching the next generation Asian languages is a flawed endeavour, how did earlier generations of English-speakers deal with the problem of talking to Asia?

It’s ironic, but 200 years ago, when Australian settlers first began trading with China, Chinese law forbade anyone, on pain of death, from teaching Chinese to foreigners. The first English speakers to learn Cantonese, such as the missionary Robert Morrison (1782-1834), had to do so in secret. 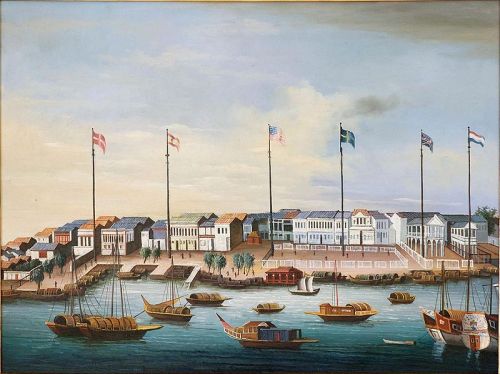 The European factories in Canton, c. 1820. The flags represent Denmark, Spain, the U.S., Sweden, Britain, and the Netherlands – and all would have been provided with a specialist interpreter by the Cantonese authorities

China carefully controlled its trade with the outside world.  The only trading port was Canton [Guangzhou] and the trade was strictly regulated under the comprador system.  Foreign traders had to employ Chinese translators.  They could only enter Canton during the trading season and were not allowed to bring their wives or families with them.   Not knowing the language put gweilo at a disadvantage in their dealings with the Chinese – that was the point! – but they got by with translators and a patois – pidgin English is a corruption of ‘business English’.

In other parts of Asia, things were less regulated.  The British in India (or the Dutch in Indonesia) lived in closer proximity with the locals.  In 18th century India, intermarriage was common, and the children of these unions probably spoke the languages of both parents.  In the 19th century, interracial marriages were frowned on, but British children born in India might learn Urdu or Hindi from the servants.  In any case the stronger position of the East India Company made English the language of commerce.

In the Middle East, foreign embassies and trading companies used a different strategy, employing dragomans as guides and interpreters within the Ottoman Empire.  Recently I supervised a terrific PhD thesis about an Armenian family in Beirut who acted as dragomans to the British Embassy across several generations through the 19th century.  These men were skilled linguists who spoke Arabic, Ottoman Turkish, Italian and English, as well as their original Armenian.  Such people still play a role today, dealing with tourists, journalists and aid agencies as well.  The pay can be good, but in dangerous times they risk being too closely identified with the foreigners they serve.  Many will have worked hard to learn English through the internet, but if they start as adults they will struggle.

Children really are the key.  The Chinese prohibition on wives and families in Canton was critical in maintaining control of their language, because small kids pick up languages so easily.  It’s much too late by the time they reach high school, but children pick up (and drop) languages with a facility we adults can only envy.

So – do we need to teach more children Asian languages?  By all means.  I don’t regret my years of schoolgirl French, which gave me a vague insight into French culture, a rather better grasp of my own language, and means that I can confidently buy a baguette in a Paris market.  But I wouldn’t want to negotiate a trade deal in French.  I’ll leave that to someone genuinely bilingual, like my friend’s son, raised by a French father and an Australian mother in both languages.

Similarly, there are plenty of bilingual people already in Australia, who have spoken 2 languages from early childhood.  My highly anecdotal evidence is that we could recruit all the Hindi teachers and translators we need from amongst Brisbane taxi drivers – except that most of them are half way through an engineering degree, and would, quite rightly, turn up their noses at the sort of money we pay teachers anyway.

The PhD thesis on dragomans in Beirut is:

Judith Laffan, Negotiating empires: “British” dragomans and changing identity in the 19th century Levant (2011) – available online, but only to UQ staff and students.