Town meets Gown in Toowoomba at the British World Conference

I spent last week at the British World Conference held at the University of Southern Queensland in Toowoomba from 2 to 5 July.  It was quite a coup for USQ to host this conference, which has been running for a decade and has previously been held in much larger cities, including London, Cape Town and Melbourne.

Toowoomba has fewer than 100,000 inhabitants, and USQ is small, so the vibe was very different, more intimate and a bit provincial.  This wasn’t helped by Qantas, which forgot to add a leap-second to its computer booking system on 30 June.  The following day planes were delayed up to 4 hours, throwing connections into chaos.

Since Toowoomba is less than 150k. from Brisbane, many registrants drove up for the day – inevitable, I guess, but a pity from the perspective of creating a cohesive group – but a strong contingent stayed for the whole 4 days.  In all, there were nearly a hundred participants, mostly Australian but with some coming from Britain, India, Malaysia and New Zealand.

An international conference is a big deal in a community the size of Toowoomba, both culturally and (I would guess) economically.  Local radio interviewed visiting speakers, whereas in larger centres, university media units have to work harder to get much coverage of academic events.  I don’t think this is a purely Australian phenomenon.  I remember that we visitors were similarly feted in Salem, Massachusetts, when I went to the World History Association conference there in 2009.

Toowoomba is not primarily a university town, though according to the Australian Bureau of Statistics, the number of residents employed in ‘education’ is rising.  USQ dates from the 1980s, but Toowoomba is much older, growing through the 19th and 20th century on the wealth of the Darling Downs.  Its 19th century public buildings reflect that pastoral wealth, but I hadn’t realized before that it also has some wonderful architecture from the inter-war years.  These art deco masterpieces, such as the Empire Theatre and the façade of Pigott’s department store, date from the Depression, when few people had the money to invest in buildings, especially commercial buildings. 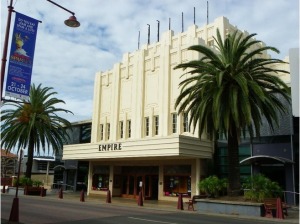 I’m not going to report on the conference itself.  With parallel sessions, it was impossible to hear everything, and to comment only on the papers I heard would be invidious.

But one feature of the conference impressed me greatly.  On Wednesday night, in a brave or foolhardy act, the conference arranged a public lecture in town on the same night as the final State of Origin.  In a provincial Queensland town, the rugby league final between Queensland and New South Wales is virtually compulsory viewing, and all the pubs were full.

Despite this, there was a full house to hear Christopher Haigh, recently retired from  Christ Church, Oxford, give the ‘Dean’s Lecture’ in a restored Methodist church in central Toowoomba.

Although many people were conference folk, there must also have been many Toowoomba residents, out on a cold winter night to hear a paper on ‘Counter-Revolution and Conscience: Living with change in 17th century England’.  There were wine and nibbles afterwards, which was hospitable, but hardly enough by itself to drag people away from the rugby or a warm bed.  It was a good paper, too, looking at the restoration of Charles II after the Commonwealth – but ditto.

In the 1960s and 1970s, my own university had public lectures too.   The Courier Mail had a weekly column that advertised upcoming university functions.  Each time a professor was appointed, he (almost never she) gave an inaugural lecture, and the great and good of Brisbane came to listen.  Sometimes they came because they were interested, particularly if they were professionals in the same area, but often it was just the right thing to do. Town and Gown shared an intellectual and social space.  Then, some time in the 1980s, the University lost the habit of hospitable intellectual engagement with the community.

There are lots of reasons for this.  The political climate became more overtly anti-intellectual with the Bjelke-Petersen government.  Brisbane acquired 2 new universities, and competition between them – for funds, for students and for generous alumni – soured the sense of a shared intellectual community.  As Brisbane has grown in size, the traffic has got worse, the parking is impossible, and people have retreated into the suburbs.  There are still attempts to involve the community in university activities – but they are rarely very successful.

Now Town and Gown meet virtually, on blogs or on twitter, rather than face to face.  But in the small town of Toowoomba last week, I experienced a more civilized interaction.  I miss it.

Postscript: Queensland won the State of Origin by 1 point.