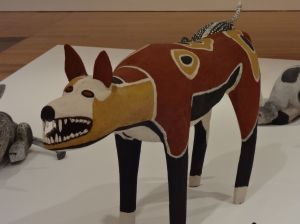 When my father was a young boy, he spent a lot of time on his uncle’s farm, where he had a pet dingo.  One day, he was walking in town with his pet beside him when someone shot it dead.  It still upset him when he told me the story 30 or 40 years later.  Dad was born in 1921, so this must have been about 1930, around the same time that the Queensland Government declared open season on koalas.

There was no comeback.  Anyone could shoot a dingo – even in the main street of Caboolture.  Dingoes were vermin.

Last week, the fourth coronial inquiry into the death of Azaria Chamberlain decided that – just as Lindy Chamberlain claimed 32 years ago – a dingo did, after all, take her baby.

There has been some soul-searching, and some apologies by individuals who were swept up in the hysteria of the time.  One such apology came from Tim Flannery, biologist and public figure, and recently Australian of the Year.  In the Sydney Morning Herald, Flannery wrote that he ‘accepted Lindy Chamberlain’s guilt uncritically’.

It’s hard to think ourselves back into the mindset of another time, hard to explain why we seized on the unlikely, rather than the likely, explanation.  One concern for Flannery – and I suspect for many – was fear that dingoes might ‘face widespread persecution’ if one was found responsible.  For European settlers have nearly always treated dingoes as vermin, to be poisoned or shot if they threaten our stock – or our children.

Yet dingoes are not really wild animals.  The first dingoes appeared in Australia only about 4000 years ago.  By then, Australia was already an island continent, so dingoes almost certainly arrived by boat.  (Until last year, I would have left out the ‘almost’ – but after the Japanese tsunami in 2011, a pet dog was found drifting on wreckage in the sea – alive – 3 weeks later.  So you never know, but if the dingo arrived by tsunami, she was pregnant.)

Wolves were first domesticated at least 15,000 years ago, so by the time dingoes arrived here in Australia, they were already far removed from their original wolfish ancestry.  They resemble other dogs from Southeast Asia, and because they came in very small numbers, they have very little genetic variability.

Dingoes never made it to Tasmania, which was cut off by sea some 10,000 years ago, so carnivorous marsupials, the thylacine (Tasmanian tiger) and Tasmanian devil, both survived there, whereas competition with dingoes saw them both wiped out on the mainland.

Aboriginal people adopted dingoes as pets – or perhaps it was the other way around.  Dogs and humans co-evolved everywhere except in Australia, where Aborigines had a head start on dingoes by forty or fifty thousand years.  Dingoes and Aborigines were both hunters, but independently.  They don’t seem to have cooperated, as hunting dogs do elsewhere, perhaps because of the nature of the prey available – although it’s true that the Aboriginal suite of hunting tools changes about the same time, so perhaps there’s more yet to be learned.

Instead, dogs and humans befriended each other.  Dingoes became camp dogs, eating scraps, living and sleeping together in close quarters.  (A two-dog night is a cold night; a three-dog night is colder.)  Dingoes also became important in the Aboriginal Dreaming.

When settlers arrived in Tasmania in the early 19th century, they brought with them hunting dogs known as ‘kangaroo dogs’. Kangaroos became an important source of meat for the early Van Diemen’s Land settlement – and shooting them devastated the food supply of the Tasmanian Aborigines.  Within a few years, the Tasmanians turned to hunting sheep, the settlers returned fire, and the conflict spiralled into genocidal slaughter.

Yet there seems to be a dog-sized hole in the human heart – or vice versa.  Although Tasmanians had no experience of dogs, within a few years, they were adopting these kangaroo dogs, presumably as pets.  They are present in Benjamin Duterrau’s important painting, The Conciliation. 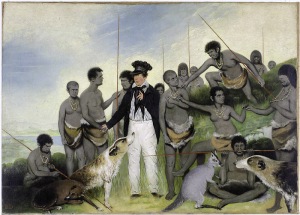 Benjamin Duterrau, The Conciliation (1840) – an idealised image of the work of George Augustus Robinson, ‘Protector of Aborigines’

There are few purebred dingoes left, since they breed readily with other dogs.  Some people believe that the dingoes of Fraser Island, off the Queensland coast, are the most genetically pure.  Fraser Island had an Aboriginal population long before the arrival of Europeans.  It was then harvested for its timber [see Teredo post] until recently.  Both Aborigines and timber-getters kept dingoes as pets.

Now it is a tourist destination.  When I visited Fraser for a holiday, the guide told us: ‘Don’t feed the dingoes.  They are dangerous – and that one’s name is Sally.’

The dingoes of Fraser Island have always seemed to me to behave like dogs that have lost their masters – and the residents treat them as such, despite the warnings.  And they are hungry now.  A major part of their diet was the shellfish – pipi or eugarie – buried in the sand, but 4-wheel drives [SUVs] along the beaches have destroyed most of the shellfish.  Now they hang around barbeque areas and camping grounds – just as they did near Uluru, back in 1980.

PS. For those of you who live near Brisbane – I can really recommend a current collection of Camp Dogs of Aurukun on display at the Gallery of Modern Art.  The photo above comes from the exhibition.