The New Cythera and the Transit of Venus

I wonder, if Captain Cook had gone to Tahiti in 1769 to observe the Transit of Mars* instead of the Transit of Venus, he would have seen an island full of brave warriors rather than nubile maidens? 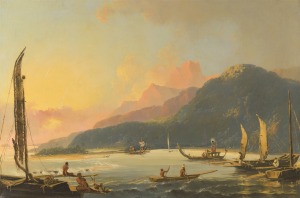 Probably not. Cook’s Tahitian visit was not the first instance of this association between the island and the goddess of love, though it is a strange coincidence that linked the planet Venus with Tahiti.

In her book, Aphrodite’s Island: The European Discovery of Tahiti (2009), the anthropologist and historian Anne Salmond looks closely at what happened when an earlier explorer, the Frenchman Louis Antoine de Bougainville, visited in April 1768.

The men approached the ships first, followed by the women, and finally a beautiful young girl came on board.  In front of the gob-smacked sailors, she dropped her tapa cloth garments and exposed herself.  According to Anne Salmond, it was a local custom that

people stripped to the waist in the presence of gods and high chiefs, and a high-ranking stranger was often greeted by a young girl swathed in layers of bark cloth who slowly turned around, unwinding the bark cloth from her body until she stood naked – a ritual presentation with no necessary implication of sexual availability.

The Frenchmen had not seen a woman for six months.  It’s not surprising that they misunderstood the gesture, and the girl was groped enthusiastically before she finally left the ship ‘looking distressed and offended’.  That first encounter was to fuel Europeans’ sex-charged view of the islands of Polynesia.

When Bougainville returned to France, he published an account of the voyage, Le Voyage autour du monde (1771).  The book became a red-hot bestseller, with passages such as the following, describing that first encounter:

…the girl carelessly dropt a cloth, which covered her, and appeared to the eyes of all beholders, such as Venus showed herself to the Phrygian shepherd, having indeed the celestial form of that goddess.  Both sailors and soldiers endeavoured to come to the hatch-way… At last our cares succeeded in keeping these bewitched fellows in order, though it was no less difficult to keep the command of ourselves.

Voyage autour du monde (A Voyage around the World) was a sensation because of its eroticism, but also because it seemed to confirm the idea of the Noble Savage, the Romantic notion that people in a state of nature were nobler and less corrupted than those in the civilized world.  These ideas were already current when Bougainville left France; like everyone, he probably saw what he expected to see, but his Voyage fed back into the discussions of French philosophers.

Cook set out for Tahiti before Bougainville published his account, so he arrived at his experiences of Venus in the South Seas independently.  More prosaic than Bougainville, his main worry was that, by the time the Endeavour reached Tahiti, a regular sex trade had developed.  The Tahitians had no metal, and enterprising sailors found they could buy sex in exchange for iron – including ships’ nails, potentially endangering the integrity of the ship.

Meanwhile, preparations went ahead to observe the Transit of Venus on 3 June 1769, at a specially built high point named, appropriately, Fort Venus.  Transits occur in pairs.  The Transit of Venus next Wednesday, 6 June, follows one in 2004, and Cook’s 1769 Transit followed one in 1761.  In both cases, those of us who observe the second transit will be dead before the next one comes around.

The original purpose of observing the transit, from as many locations as possible, was to provide data to allow mathematicians to calculate the distance between the Earth and the Sun.  The astronomer Edward Halley first recognised the potential for using transit observations in this way, and went out to St Helena in 1679 to observe a Transit of Mercury, but was defeated by foggy conditions.  In the same way, the data collected at Fort Venus turned out to be a disappointment – though Cook’s secret instructions to search for the Great South Land were more successful.

The New Cythera, meanwhile, spun its magic back in Europe.  Tahiti became inextricably linked with eroticism.  Both the British and French crowns laid claims to the islands, though it was only in the 1840s that France seriously ran up the flag.

But both France and England have also endlessly competed for the right not to be responsible for another consequence of first contact, just as closely linked to the goddess of love – venereal disease, which ravaged the islands over the next century or more.

*A Transit of Mars is an impossibility.  We can only see transits of those planets between ourselves and the Sun, so Martians could view a Transit of Earth – but not the other way around.