Is Google a Monster?

Many years ago, I wrote a biography of a woman called Maria Rye who was involved in first-wave feminism during the 1850s and 1860s.  The details aren’t important now – because without asking my permission, Google digitized the whole thing.

Google did this a lot, a few years back.  Google, you see, is a monster.  Many authors protested at this abuse of their copyright, and eventually there was a settlement, but since they had sued in an American court, the settlement only really provided compensation for American authors.  Anyone else had to accept a derisory amount of money, or take up the case individually in an American court – which was, of course, impossible.  And since Google didn’t notify us of the deal and there was a cut-off date, most of us got nothing.  Which is fine, really, since the only royalties I ever got came in American dollars, in amounts smaller than the cost of banking the cheques and converting them to Australian dollars.

So I am wary of Google, which is, as I said, a monster.

Maria Rye was involved with a group of women known as the Langham Place group.  They published the English Woman’s Journal, which advocated for women’s causes: votes for women, better job openings and education, ways for single women to emigrate to the colonies in search of better opportunities.  Maria wrote for the Journal, and her activities are regularly reported there.

Maria Rye also wrote for several years for another women’s magazine, the Englishwoman’s Domestic Magazine.  The EWDM was published by Sam and Isabella Beeton.  It was much less feminist and more domestic, with recipes and dress patterns, but they published her articles on social issues, and history from a feminist perspective. 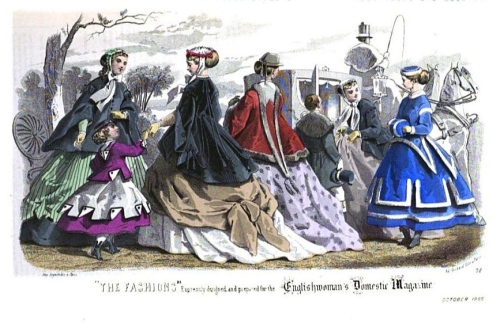 Together, these two journals made up a good portion of the research I did for several chapters of my book.  The English Woman’s Journal wasn’t available on microfilm, and neither was in many libraries, but I worked in London for many weeks, going through the copies in the Fawcett Library (now The Women’s Library, and in trouble according to the latest news).  I couldn’t afford to live in London, so I commuted from the Midlands by train every day, and occasionally stayed the night in my long-suffering cousins’ attic.

Why am I telling you this?  Because this morning, I downloaded the entire runs of the Englishwoman’s Domestic Magazine and the English Woman’s Journal.  It took less than 10 minutes, and I now have them on my iPad in a new App called Google Play.  Both the App and the downloaded journals were free.  I can read them offline. Unlike the Fawcett copies, the illustrations in my version of the EWDM are in colour.   For many books, you can toggle between a scanned version and ‘flowing text’, which is searchable.

Google Play is not perfect by any means.  The system of going from Google Books (to find and order the books) and Google Play (to download them) is clunky.  Reviewers in the Apple Store are barely lukewarm towards the App because there are very few new books available to buy.  I still prefer to read my novels in paperback anyway.  But because Google has now digitized so much old material, for a historian working with printed materials, the system is brilliant.

So far I’ve downloaded these two journals, plus several books from the 1820s to the 1860s, which seem (from the stamps and catalogue numbers) to come from the British Library.

So Google is still a monster, but this morning at least, I am grateful to the monster. I am also much more sincerely grateful to the librarian at the Fawcett Library, all those years ago, who told me to look at the Englishwoman’s Domestic Magazine in the first place because he thought the articles signed ‘M.S.R.’ might be written by Maria Susan Rye.  You don’t get that sort of service from Google.

This time last year:
To Err is Human; to pick up errors is human too, 2 April 2011
Sandgate, in a good pair of boots, 6 April 2011
Communications in Revolution; Revolutions in Communication, 9 April 2011
Oh Shenandoah! Australians in the American Civil War, 14 April 2011

2 responses to “Is Google a Monster?”