William Paterson and the Battered Wife

It’s disconcerting to come across someone you know in an unfamiliar context.  You discover that your colleague in the bank is a part-time football hooligan (it happened to my sister’s friend), or the nice tenants in your rental property turn out to be members of Ananda Marga (it happened to me, at a time when the sect was allegedly responsible for various acts of political terrorism).

This happens with historical figures too.  One of the endless fascinations of biography is the way that people keep breaking out of the boxes we put them in.

I’ve just been reading Wendy Moore’s biography of the Countess of Strathmore.  In the way of many books today, the long title – Wedlock: How Georgian Britain’s Worst Husband Met his Match (2007) – gives you most of the plot.  END_OF_DOCUMENT_TOKEN_TO_BE_REPLACED

Teredo – worms shall devour them

Places matter to people.  In my suburb, one of our best-loved places is the Shorncliffe pier.  Throughout the day, it is a place for tai chi and joggers, crab pots and fishing.  In the early evening, it is full of friendly walkers, with or without dogs.  People sprinkle the ashes of those they love from its railings, or use it as a backdrop for wedding photos.  It was recently used in a UK television ad available on YouTube here.

They used to say that Sandgate is 12 miles from Brisbane – or 13 at low tide.  It is a long way out to deep water, so early settlers could not get their goods – or themselves – from ship to shore without wading.  As the community grew, in 1865 they made plans ‘for the construction of a PIER or LANDING STAGE at Sandgate’.  This pier opened to the public in 1882.

From the start, the pier had a dual purpose, as a commercial landing stage, but also as a popular promenade.  Piers were a part of the tradition of beach ‘watering places’, growing popular amongst all classes by the mid-19th century.  They were destinations for city day-trippers who came by railway to enjoy a day at the beach, perhaps swimming, but probably just strolling along the waterfront, and enjoying the concerts, food outlets, Punch and Judy shows and other commercial activities that took place on and around a pier.

Our pier followed the social model of British piers such as the West Pier at Brighton (1866) and the Cleveden Pier on the Severn (1869), both built at much the same time.  People came by coach, and then by rail (1882) to enjoy a day at the beach.  But while the British piers were mainly built of iron, wood was much cheaper in Brisbane, so our pier is wooden.

A few weeks ago, council inspectors found marine borers in its timber pilings and the pier has been closed until further notice.  Since then there have been petitions and a rally, a local newspaper campaign and a lot of promises.  A local election next Saturday has raised the temperature. END_OF_DOCUMENT_TOKEN_TO_BE_REPLACED

Is Google a Monster?

Many years ago, I wrote a biography of a woman called Maria Rye who was involved in first-wave feminism during the 1850s and 1860s.  The details aren’t important now – because without asking my permission, Google digitized the whole thing.

Google did this a lot, a few years back.  Google, you see, is a monster.  Many authors protested at this abuse of their copyright, and eventually there was a settlement, but since they had sued in an American court, the settlement only really provided compensation for American authors.  Anyone else had to accept a derisory amount of money, or take up the case individually in an American court – which was, of course, impossible.  And since Google didn’t notify us of the deal and there was a cut-off date, most of us got nothing.  Which is fine, really, since the only royalties I ever got came in American dollars, in amounts smaller than the cost of banking the cheques and converting them to Australian dollars. END_OF_DOCUMENT_TOKEN_TO_BE_REPLACED

The British Library, and why I love librarians

The British Library has moved now.  It occupies a modern building on Euston Rd, which is comfortable and efficient for staff and scholars alike.  It has free wifi, hundreds of lockers, and food outlets with decent coffee, and the computerized ordering system works fine.

But it will never give me the same buzz to enter the new building that I used to get when I walked into the central reading room of the old library, with its high domed ceiling, rows of desks radiating out from the centre, and leather upholstered chairs.  It was full of the ghosts of readers past. END_OF_DOCUMENT_TOKEN_TO_BE_REPLACED

The Titanic’s Menus and what they can tell us 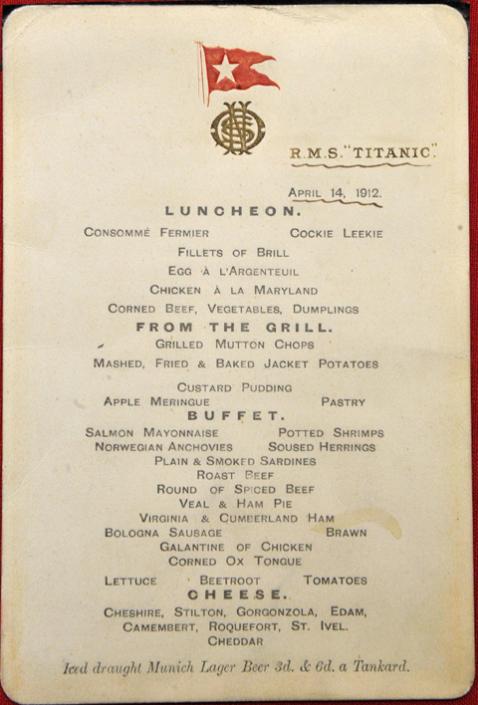 A menu from the first class service on the last luncheon of the Titanic’s maiden voyage has just been sold at auction for £76,000 [$A117,000].  This menu’s high value lies in its link to the Titanic, of course, especially in this centenary year.  But menus in any case make great collectors’ items.  They have an intrinsic fascination – I challenge anyone to read one without choosing which dishes they would order! – and they can tell us a lot about the time and place they come from. END_OF_DOCUMENT_TOKEN_TO_BE_REPLACED