The Value of Manuscripts

It happens rarely – but it does happen.  People steal manuscripts, autographs, stamps, seals, maps and illustrations from libraries.  Last July, Barry Landau, author of The President’s Table: Two Hundred Years of Dining and Diplomacy (2007), was caught with an accomplice, Jason Savedoff, stealing documents from the Maryland Historical Society.  Since then, police have found about 10,000 documents in their apartment.

‘I cannot believe it,’ Lynn von Furstenberg, the second wife of Prince Egon von Furstenberg and a close friend of Landau’s for many years, told The Daily Beast. ‘The things I’ve been reading about him in the press are not the Barry I know. He’s just this gregarious, sweet, sensitive human being.’

Well yes, maybe.  On Amazon, Landau is described as a ‘historian’ – but as those of us in the profession well know, anyone can call themselves a historian.  There’s no quality control outside the university system, and since non-academic historians do a lot of important work, I don’t really want any – but sometimes someone goes rogue.

Working in archives, in major libraries, or small institutions such as the Maryland Historical Society, historians often have access to very valuable items – and for some people the temptation can be overwhelming.  I remember hearing many years ago about a university lecturer who was caught stealing 19th century stamped envelopes from the British Library.  He collected stamps, so knew what items to look for.  He came from a ‘good’ background and the whole affair was hushed up – so successfully that he got a Chair at an Australian university that undoubtedly knew nothing about his background.

Every library has a security problem, and as the value of items rises, the chance rises that rare books will be pilfered for their maps and pictures, or autograph letters and envelopes will disappear out the door, concealed in folders of notes.

Libraries fight back, of course.  At the British Library, and similar libraries, you can only take things into the reading rooms inside clear plastic bags, and most repository libraries have metal detectors, though security people are mainly concerned with keeping dangerous items out, rather than keeping precious items in.

In manuscript rooms, security is higher still.  I remember visiting Southampton University library to read a section of Lord Shaftesbury’s diary.  Before they handed me the volume, they weighed it, and weighed it again when I returned it.  Apparently this is standard procedure in manuscript libraries, but most do it out of sight of the readers.  Southampton decided that doing it publically was a more effective deterrent.  (In case you are thinking of replacing a few pages of A4 in the folio, it is very hard to get the substitute weight exactly right.) 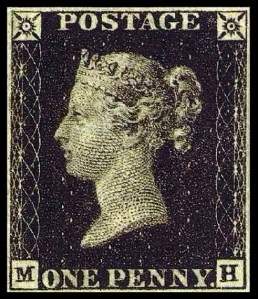 Fencing these thefts is relatively easy with EBay and the like.  Many of these thieves are not interested in the money though, or not just the money.  Like the stamp collector in the British Library, often they are collectors who see the concrete objects in front of them, and recognize their intrinsic value.  Where we historians tend to see only the words on the page, they see the page itself.

Meanwhile the relationship between philately and history cuts both ways.  Many years ago, I spent a lot of time working on the letters of Florence Nightingale in the British Library.  I’m not sure when, and how, these letters arrived in the library, but before they did, somebody tore off the stamps, no doubt so that some child could stick them in a stamp album.  Where the stamp was on an envelope, this didn’t matter a great deal (though it would to someone wanting to know when and where they were posted), but many letters were folded and sealed, with the address and stamp intrinsic to the letter.  When the stamp was torn away, it left a gap in the letter itself.

On the other hand, many letters only survive because of the enthusiasm of stamp collectors.  In 2006 the Mitchell Library in Sydney bought 10 letters written in Australia by ‘David’ in 1920, and posted to Mrs Dudley Ward in England.  A Canadian philatelist bought them, presumably because of their high value Australian stamps, but they hadn’t been read and their significance wasn’t recognized, until someone recognized the name ‘Dudley Ward’.   In 1920, the Prince of Wales, Edward Albert Christian George Andrew Patrick David – known to his family and friends as David – visited Australia, from where he sent passionate letters to his mistress, Winifred (Freda) Dudley Ward, the wife of a British MP.  Freda never spoke of her long affair with the Prince, and who knows how those letters came to be in Canada, but without a stamp collector, they might have disappeared long ago.

For historians like me, the words on the page are what matters, not the page itself.  I’ve no desire to collect stamps or autographs or old maps, but I recognize that some people do, so it is wonderful when honest collectors make their collections available digitally – as here and here, for instance.

Meanwhile I’m happy to read digitized versions of documents when they are available.  Though I am sad that this will make visits to overseas libraries less necessary in the future, it certainly makes research a lot cheaper and more accessible.

I still can’t make my mind up about one thing.  Since we know that an illicit market for valuable items exists, and since libraries and archives hold such tempting collections of these items, should they judiciously sell off some of their originals?  Every historical instinct screams NO, but perhaps releasing lots of copies of Florence Nightingale’s signature on to the market would depress its value, and make theft less likely.  Your thoughts?

8 responses to “The Value of Manuscripts”