I’m travelling at the moment, and on Saturday I crossed one of the great fault lines of Europe.  Although on the TGV, it takes less than 90 minutes from Paris to Brussels, I’ve crossed many boundaries – of language, culture, politics – and perhaps most profoundly, from wine to beer!

Belgium has now been without a government for nearly a year – over 250 days and counting – because the different political parties can’t reach agreement about a coalition.  The issue is language. Superficially, there’s not much evidence of this: to an outsider, the place looks thriving, but division over language is a chasm, because it affects our personal lives even more than religion, or food, or whether women were veils or bikinis.

Language affects people so profoundly: what do you speak at home? what language do your children speak at school? how will their education be affected if they can’t speak their mother tongue there?  Do you think differently, when you think in a different language?  Certainly, some research has suggested that children learn to count more quickly in languages with short words for numbers because they are subvocalizing as they learn.  This would make English a ‘better’ language for teaching maths than Welsh – but the research is disputed.

In Belgium, the two languages are Flemish (close to Dutch) and Walloon (close to French, and now largely replaced by it).  Brussels used to be a French speaking island in a Dutch speaking hinterland.  French is still the more important administrative language, because of the presence of the European Parliament and the greater global reach of French, but the balance of power has been shifting.  Flanders, which used to be a farming backwater, has benefited from the growth of high tech industries in the Netherlands, while the old French speaking elite is in decline.

With national frontiers obliterated by the EU, Dutch has become more dominant, and Belgium, a nation that only dates from 1830, seems to be dissolving into its component parts.  I’m struck by the fact that while I saw the French tricoleur wherever I went in France, I’ve hardly seen a single Belgian flag since I arrived, and few references to the country of Belgium.  Even the tourist office is Brussels is full of guides to Flanders.  Flanders has a much longer history than Belgium – Flemings were a distinct group in William the Conqueror’s army.

In my hotel (Ibis, a French chain), the women serving in the breakfast room spoke French, whereas the women on the reception desk spoke French when they answered the phone, word perfect English (and presumably German, Italian and Spanish!) to their customers, and Dutch to each other.

Just so, the Emperor Charles V (1500-1558), who grew up around here and was taught by a Dutchman, Erasmus of Rotterdam, said that he spoke Dutch to his friends, Spanish to God, and German to his horse.  (Or maybe he said it – the attribution is pretty shaky.)

In the late middle ages, the Netherlands and Belgium were part of the Duchy of Burgundy, one of the richest areas of Europe. Towns like Bruges/Brugge and Ghent/Gand were large cities based on trade.  (Note that we call them by their French names, though Antwerp (Flemish Antwerpen) is better known than French Anvers.)  The Duke of Burgundy’s court was famously sophisticated, spending lavishly on painting, illuminated manuscripts, romance literature and wonderful wood carvings.  They weren’t kings, but the Dukes played an independent role in the politics of the day – it was a Duke of Burgundy, for instance, who handed Joan of Arc over to his English allies during the Hundred Years’ War.

Then the last Duke died without a male heir, and his daughter, Mary of Burgundy, was married off to the Habsburg Maximilian of Austria.  (I’ve written about this elsewhere)

Mary’s grandson Charles V inherited Spain from his mother, and the Habsburg lands from Maximilian, so being Duke of Burgundy was only a small part of his life.  Nonetheless, Charles managed to hold the show together while he lived.  He spoke Dutch, and had a Dutch mistress.  But after he retired in 1555, Philip gradually replaced Dutch administrators with Spaniards, and the local population rebelled.

It’s known as the Dutch Rebellion, but it began in Brussels, where in 1568 2 leaders from the local nobility, Counts Egmont and Horn, were executed in the main square.  A third of the rebel leaders, William ‘the Silent’ of Orange, managed to escape to Germany.  There were many issues – taxes, religion, provincialism, competition for colonies – but 80 years later, after a war of independence that was also – like so many – a civil war, the United Provinces of the Netherlands were recognized by the rest of Europe.  A federal republic, its constitution became a model for the Americans; unlike the Americans (as yet?), the Dutch finally drifted into a hereditary monarchy – Queen Beatrix belongs to the House of Orange.  (That’s why Dutch fans at football matches look like escapees from Guantanamo Bay in their orange outfits.)

The southern, more Catholic, part of old Burgundy opted out of the new republic, remaining possessions of the Spanish, then the Austrian, Habsburgs, until in 1815 the Congress of Vienna added them to the Netherlands.  But in 1830, they rebelled.  They imported a king, Leopold I, from Germany, and became Belgium.  Now that religion is a less important unifying force than language, and everyone is bundled into the EU anyway, the logic behind these boundary lines variously drawn between 1648 and 1831 don’t seem to work well any more. 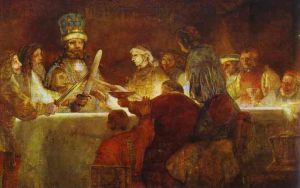 I’ve crossed another boundary line, too.  Unlike France, this area was never fully subjugated by the Romans.  The name Belgium comes from Gallia Belgica, the northern part of Gaul, but in the swamps and wetlands of the low countries, the Romans never conquered the local people.  One tribe in particular – the Batavians (Latin: Batavi) – fought back.  During the 17th century war of independence, the Dutch rediscovered the Batavian rebellion.  Rembrandt painted it, in the Conspiracy of Julius Claudius Civilis (Simon Schama discusses this painting in detail, available on YouTube).  The Dutch East India Company named their factory in Java ‘Batavia’ (now Jakarta), and it was the name of the ship wrecked on the Abrolhos Islands en route to Java in 1624.  During the French Revolution, the puppet government set up by the French in the 1790s was called the Batavian Republic, too.

Romans liked their wine – and the Roman frontier tends to follow the limits of where grapes will grow.  It’s too cold and damp here, and the growing season is too short, for good grapes.  So this is another boundary I’ve crossed – from wine into beer country.

I encountered this yesterday, when I went to the town square – the Grande Place / Grote Markt – where Horn and Egmont were executed back in 1568, to discover a beer festival in full swing, with a parade of brewery carts and carthorses circling the old city.  I don’t know what Charles V drank, probably both beer and wine, depending on where he was at the time, but his son Philip almost certainly preferred a good rioja.

2 responses to “In Flanders Fields”