So it’s all over.  Wills and Kate are safely hitched, and life gets back to normal.  It was nice of them to ask for a donation to charity as a wedding gift – $25,000 to the Royal Flying Doctors is sensible, economically rational in these sober days.  But it lacks the glorious wackiness of 500 tins of pineapple, which Queensland gave the happy couple, back when Princess Elizabeth married Philip Mountbatten in 1947.

In gloomy post-war Britain, perhaps tins of pineapple brought a little sunshine into their lives.  I hope it was in rings, not crushed.

But why pineapple?  It’s hard to believe now how prized tinned fruit was in the 1940s and 1950s, before frozen foods were common, and when fresh fruit was a strictly seasonal luxury.  Tropical fruits were particularly exotic. 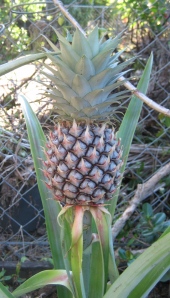 Pineapple is a bromeliad, and a native of South America.  They first arrived in Europe with Columbus, and caused a sensation, as much for their decorative appearance as for their taste.  But bromeliads don’t like frost, and in northern Europe they would only grow under shelter.  John Claudius Loudon, in his Encyclopaedia of Gardening (1822) explained how to grow pineapples in a pinery, warning that

‘The culture of pine-apples is attended with a heavier expense than that of any other fruit under glass; especially if they be grown in lofty stoves, the erection of which is very expensive.’ 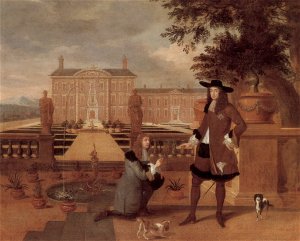 So pineapples were a rare treat for the very rich.   I remember reading the reminiscences of one city gentleman who went to a City of London dinner in the 1840s, where a pineapple had pride of place amongst the table decorations.  When the meal ended, some of the (no doubt drunk) guests began souveniring these decorations.  When someone grabbed the pineapple, the caterers quickly intervened, telling him that they had only rented the fruit for the night, and it was already booked for another dinner in a few days’ time.

The democratisation of the pineapple came with the canning industry in the late 19th century.   In America, pineapple production became a major agribusiness, with the Dole family dominating production in Hawaii.  In Queensland, however, there were many small-scale independent pineapple producers, including a lot of ex-soldiers on small blocks of land north of Brisbane, in what is now the hinterland of the Sunshine Coast.

Growing pineapples is hard work.  The novelist Eleanor Dark lived on a pineapple farm near Palmwoods during the 1950s, and wrote a book, Lantana Lane (1959), based on her experiences there,

‘He had been grabbing an hour or two here and there to get ready for his new pines, and the patch was rotary-hoed, and ploughed, and fertilised, and prepared for contour planting.  Though Biddy grew tired rather quickly now, she insisted on laying out some of the butts for him when he began to put them in…’

The pineapple farms were concentrated along the railway line, and the farmers sent their fruit by rail to be processed by a farmer’s cooperative on the northern edge of Brisbane.   Golden Circle began in 1947 with over 900 growers, and had its own railway station.  It was a major exporter and an important employer, especially of casual labour.  All my generation knew Golden Circle, ‘the Northgate cannery’.  Many of us worked there as students during the summer holidays, which was also the canning season.  The railway station is still there – but the co-op was finally bought out by Heinz in 2009.

I still think that it’s a bit wacky to give tinned pineapple as a wedding present.  But in 1947, it probably made more sense, for it was, indeed, a gift that exemplified Queensland.  A comparable gift for Wills and Kate would probably be a lump of coal.  Much better to donate to the Royal Flying Doctor Service – with the emphasis on the Royal.

Eleanor Dark, Lantana Lane, is in Google Books, as is Loudon’s Encyclopaedia of Gardening.