ABC television has just been showing a drama, Paper Giants, about the birth of Cleo in 1972, in which a younger Ita Buttrose and a slimmer Kerry Packer develop a new, modern woman’s magazine with a – gasp! – naked male centrefold.  The moment, if you like, when women’s magazines began to go feral, and changed from publishing articles about 100 things to do with a pound of mince, and turned instead to test driving the best value in vibrators and an endless stream of celebrity gossip.  Ah, progress.

But before Kerry Packer, there was his father, Sir Frank Packer, and his woman’s magazine, the Australian Women’s Weekly, for many years the publication with the highest circulation in Australia, and the most profitable item in the Packer empire, Australian Consolidated Press.  The Australian Women’s Weekly has just been digitized by the National Library of Australia here, from 1933 to 1984, so it is now possible to search or browse through 50 years of women’s experiences in Australia. 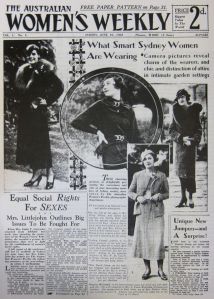 In its day, the Weekly was a breakthrough too, just as much as Cleo.  Browsing the early years, it’s striking how much it dealt with.  The cover of the first issue, on 10 June 1933, has items on ‘What Smart Sydney Women are Wearing’ and ‘Unique New Jumpers’ – but also ‘Equal Social Rights for SEXES’, reporting on a recent women’s conference that dealt with issues such as equal pay, legal equality, and access for women to jobs in the Public Service.

Even in the 1950s, the Weekly was more than just a woman’s magazine.  In 1955, it serialized the novel, Marjorie Morningstar, written by the Pulitzer Prize winner Herman Wouk.  I vaguely remember both my parents swapping copies of the magazine with friends so they could read the novel.

But what is a woman’s magazine anyway, and when did the idea arise that newspapers and magazines should appeal to only one sex?  In Jane Austen’s day, men and women read the same novels, and the Prince Regent didn’t dismiss Pride and Prejudice as chick lit.  Despite its name, both men and women read the Gentleman’s Magazine.  The same was true of Dickens’ novels, or Household Words, his monthly journal.  Both were written for the whole family.

Gradually, however, as new magazines entered a crowded market, publishers looked to niche marketing – and one such niche was the woman’s magazine.

Railways played an important role in this growth.  I’m guessing, never having been in one, but it must be very hard to read in a horse-drawn carriage.  People complained regularly of ‘sea’-sickness because of the jostling movement over bad roads, and I’ve read letters written in a carriage (by a doctor, who wrote up his case notes on the way home after visits to his patients) and they are virtually illegible.

But trains were a much smoother ride.  Passenger trains took off in Britain from the 1840s, and with them came a new opportunity for reading.  The newsagent and bookseller, W. H. Smith and Son, opened their first news stand at Euston Station in 1848, and soon expanded to Birmingham, Manchester and Liverpool, along the route of the railway line.

By the 1850s, then, more people were travelling, and some must have wanted to fill their time with light reading.  There had been earlier women’s magazines, beginning with the short-lived Ladies Mercury in 1693, but now women’s magazines really took off. 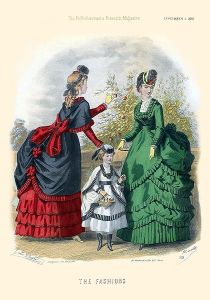 One of the most interesting was the Englishwoman’s Domestic Magazine, started by Samuel Beeton and his wife Isabella.  It covered most of the areas we think of as traditional: sewing and fashion, including dressmaking and knitting patterns, recipes, advice on servants and so on – but also more serious material, such as a serialized history of England, written from a woman’s perspective.  (Did you know that Anglo-Saxon women could vote?  No, neither did I.)

Other magazines were produced by independent women, such as the Victoria Magazine, later the English Woman’s Review, which was edited by a remarkable woman called Emily Faithfull.  Emily was a ‘strong-minded woman’, as the term of the day had it, a feminist before that word existed.  She ran the Victoria Press, training women to work as printers, and an all-female workforce produced the Victoria Magazine.  The name came from the Queen, who patronized her work.  In Australia, Louisa Lawson (mother of Henry) published a similarly radical women’s magazine, The Dawn.

Who bought these magazines?  In the 1850s, only middle class women could afford to buy the Englishwoman’s Domestic Magazine, a monthly journal with hand-etched pictures printed on good quality paper.  But production costs for magazines generally fell in the late 19th century, with cheaper newsprint (using wood pulp instead of rags), and new printing technologies that made illustrations easier to produce.  At the same time, more women began to buy magazines (as well as the things they advertised, another revenue stream for the owners).   Literacy rates amongst working class women were rising, especially with compulsory education from the 1870s in England and the Australian colonies.  Even children got their own magazines – usually with ‘Girls’ Own’ and ‘Boys’ Own’ versions.

It’s all a long way from Cleo and its nude male foldout.  But even the most classic Victorian magazine could occasionally get into trouble.  Isabella Beeton died of puerperal fever in 1865, aged 29 (something to think about next time you imagine a plump, middle-aged ‘Mrs Beeton’).  Sam struggled on without her.  A lot of the magazine was devoted to correspondents’ letters, questions, discussions, on topics great and small.  Some of these dealt with topics, such as domestic violence and adultery, that challenge our notions of Victorian repression, and in 1867 he published a series of letters about tight-corsetting that were picked up and republished in pornographic books.  It was a terrible embarrassment for Beeton – but perhaps a foretaste of the way things would go with Cleo.