Bloodsuckers: a short history of the leech

D’Arcy Wentworth, the first Colonial Surgeon in early New South Wales, used to predict the weather using leeches.  Like all doctors then, he used leeches in his practice, kept in a special leech jar that contained water in the base, and a perforated top to allow them to breathe. 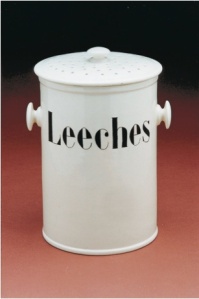 Wentworth noticed that his leeches moved around in the jar, climbing up the sides, dropping back into the dark lower area, or clinging to the lid, depending on the weather, and used them to predict approaching storms (they got more agitated, moving faster around the sides of the container).  This is less dotty than it may seem.  Leeches are essentially a thin and elastic membrane, presumably sensitive to air pressure, and they are closely related to earth worms, which rise in the soil in response to rain.

Leeches were a standard part of the doctor’s kit in the late 18th century, and Wentworth probably brought his equipment with him to Sydney on the Second Fleet in 1790.  In his day, doctors relied on technical expertise – setting bones, rapid amputations, and so on – more than medical theory, but to the extent that a surgeon or doctor had any sort of theory to underlie his practical activities, it relied on balancing the 4 humours in the body.  Too much blood, according to the humoral theory, caused the body to overheat, so the treatment for fever was bleeding – phlebotomy.

Doctors would open a vein, using a knife or various more specialised medical implements, and under some circumstances, patients were bled ‘heroically’ to the point that they lost consciousness.  Compared with such dramatic and potentially fatal treatments, attaching a number of leeches to the body must have seemed to the patient a very benign alternative.

In Wentworth’s day, doctors were so closely associated with leeches that they were called leeches themselves, although the term goes back to Bede, according to the OED.  (In the same way, a doctor who relied heavily on mercury, or quick silver, was known as a quack.)

Gathering leeches was unpleasant work. Wordsworth wrote a poem about a leech-gatherer, an old, poor man who roamed ‘from pond to pond’ earning a living by collecting leeches from the water.  The usual method was to wade into the water and allow the leeches to attach themselves:

He with a smile did then his words repeat;
And said that, gathering Leeches, far and wide
He travelled; stirring thus about his feet
The waters of the Pools where they abide.
“Once I could meet with them on every side;
But they have dwindled long by slow decay;
Yet still I persevere, and find them where I may.

It’s striking that even this old man, in 1802, noticed that they were declining in number, and it seems that medical demand led to a shortage of supply.  They were costly to collect, and then had to be transported from rural streams to the urban areas where most doctors worked.

D’Arcy Wentworth could have got his leeches locally, since they exist in the Sydney area, but he probably imported them.  Most ships’ surgeons would have kept leeches, and a trade in leeches developed between Australia and India in the 19th century.

Fresh leeches were best, but because they were so expensive, leeches were regularly reused.  They were attached to the patient’s body, usually near the source of the problem (so on the head for a headache, for instance), and left there to engorge blood until they dropped off.  They were then collected and put back in their jar to digest their meal.  Once they had shrivelled back to their normal state, the doctor used them again – but if he was short of time, or short of leeches, sometimes he would squeeze as much blood as possible from the unfortunate leech and re-attach it to his next patient.  Since the first thing a leech does is to inject its victim with an anticoagulant, this may well have been a source of cross infection.

When the bloated leech drops off, the patient continues to bleed until all the anticoagulant has gone, so although doctors might prescribe a particular number of leeches – 6 or 12 or 24, they seem to have worked in dozens – in practice, the amount of blood lost varied from patient to patient.

The humoral theory, on which blood letting was originally based, lost its authority well before the work of Pasteur overturned it completely, but as a practical measure, bleeding continued to be done until surprisingly recently.  James Herriot describes a farmer asking him to bleed a feverish horse during the 1930s, and noted with some surprise that it seemed to do the trick.  Then antibiotics arrived, and alternative methods used for dealing with fevers went out of fashion entirely.

Recently, however, leeches have made a reappearance in medicine.  They are just as good as they ever were for drawing off blood, and in some cases, such as around a wound during reconstructive surgery, they do the job more cheaply and unobtrusively than other methods.  In 2004, they were given that ultimate form of approval, from the United States Food and Drug Administration.

Recommended discussion on the four humours in medicine: In Our Time with Melvyn Bragg, with David Wootton, Vivian Nutton and Noga Arikha, 20 December 2007.
Kravetz, R. ‘Leech Jar’, in American Journal of Gastroenterology, vol. 96, 3, 894 for the picture.
D’Arcy Wentworth Papers are in Mitchell Library, Sydney