Next Saturday, a small group of apparently rational men and women will gather in Sydney to pray for rain.  After the deluges of the last few months, most of the rest of eastern Australia will hope very much that God ignores them.

Next Saturday is Sydney’s Gay and Lesbian Mardi Gras parade, and the small gathering of Evangelical Christians praying that God will rain on the parade has become a traditional part of this celebration, just as much as the enthusiastic advertisements from tourist operators, all targeting the pink dollar.

The following Tuesday we come up to one of the Christian world’s most interesting festivals, variously known as Carnival, Mardi Gras or Shrove Tuesday.  This marks the last day before the beginning of the 40-day Lenten fast that continues up to Easter.   During this time, meat and dairy products were forbidden.  The word Carnival comes from either carne vale, meaning ‘farewell to meat’, or carnelevale, meaning ‘to leave/lift off meat’.  Mardi Gras – ‘fat Tuesday’ – reflected that this was the day to pig out on all the things that would be forbidden during Lent.

Like Christmas, the celebrations that mark the beginning of the Lenten fast have transmogrified into many and varied forms, and travelled far beyond Christian Europe.  Unlike Christmas, which is always on 25 December, Carnival is a moveable feast, because it is linked to the cycle of feasts and fasts associated with Easter.

Both Carnival and Mardi Gras reflect the reality of the northern agricultural year: this was a time to kill and eat the last of the livestock that had survived the long winter.  Yet another name, Pancake Tuesday, alerted housewives to use up remaining supplies of butter and eggs.  In reality, food supplies were growing so short by the end of February, for man and beast alike, that a 40-day fast was probably inevitable anyway.  The dairy cows were dry, the poultry had stopped laying, and people made do with fish and vegetables.

Before this time of privation began, however, came Carnival.  There is a famous painting by Pieter Bruegel the Elder entitled The Battle of Carnival and Lent (1559). 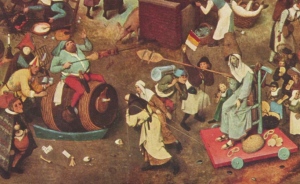 Breugel depicts all the celebrations, and the transgressions, that go with the carnival celebrations.  People are dancing, playing ball games, playing music, cooking and eating.  At the centre a duel is taking place between Carnival, fat, sanguine, straddling a keg of beer and wielding a spitted pig as a lance, and Lent, emaciated, melancholic, carrying a baker’s shovel in the joust.  You wouldn’t think that Lent could win – but he does, every time.

With the beginning of Lent, flesh was forbidden – and this might include flesh in its sexual meaning as well.  So the day before was the last day to pig out sexually as well: marriages could not take place during Lent, and transgressive sexual behaviour was very much a part of the Carnival spirit.  So was political satire, and the idea of ‘the world turned upside down’.

The term Shrove Tuesday reflects the other side of the Carnival spirit. The verb ‘to shrive’, or to be forgiven, has disappeared from our language except for the phrase ‘giving short shrift’, which refers to giving criminals only a limited time to make confession before execution. Shrovetide was a time when people went to confession, to be ‘shriven’ of their sins.

With the coming of the Reformation, the idea of Carnival gradually declined in northern Protestant Europe, but it flourished in the Catholic south.  The festival also spread geographically.  Today, Carnival is very widely celebrated, but perhaps the 4 most famous festivals occur on 4 continents: in Venice, New Orleans, Rio de Janeiro, and Sydney.  The last 2 are in the southern hemisphere, so have moved from spring to autumn, and perhaps share some of the autumnal aspects of Halloween.  Sydney’s Mardi Gras is the only one that is overtly homosexual in tone, but transgressive sexuality in its wider sense is a feature of all Carnivals.

As for the purse-lipped disapproval of the Sydney prayer group, they also have a history.  From the time of the Grand Tour in the 18th century, northern Protestants looked on in startled amazement at what Italians and others got up to during Carnival:

Thanks to God, the Carnival is ended; I say, Thanks to God, because it was to me very tiresome, tho’ it lasted here … but a Week.  During all that time…all the Streets were full of Masquers, some on Foot, and some in open Chaises: The former say a thousand silly Things, and the latter throw Meslin [a grain – like throwing rice at weddings] in one another’s Eyes by Handfuls… [Baron de Pollnitz, Rome, 1731]

The end of the Carnival is frantic, bacchanalian; all the morn one makes parties in masque to the shops and coffee-houses, and all the evening to the operas and balls.  [Horace Walpole, Florence, 1740]

It sounds remarkably like Sydney next Saturday night.  Meanwhile, in Italy as in Sydney, the locals got on with their fun – and milked the tourists for whatever they could get.

Quotes are from Bonnie Blackburn and Leofranc Holford-Strevens (eds.), The Oxford Companion to the Year (1999)

This entry was posted in calendar, european history and tagged carnival, gay and lesbian mardi gras. Bookmark the permalink.

3 responses to “Carnival: a moveable feast”