Crane Brinton, Egypt, and The Anatomy of Revolution

‘Alligators and revolutions both eat their children’, wrote one letter writer to The Australian yesterday, one of many commenting on events in Egypt at present.  I suspect this may be a slander against alligators, but it does sum up what many people feel, consciously or unconsciously about the idea of revolution: all revolutions have a lot in common, and it is very easy for the process to go pear-shaped very quickly.

I know just enough about Egyptian history to understand all those cartoons with Hosni Mubarak being fitted for a sarcophagus, and to know that a lot has happened since the last pyramid was built, which tends to be ignored, at least by cartoonists.  (Pyramids are very easy to draw)

But Revolutions are another thing.  Academics in the humanities love revolutions, in art and literature as well as history.  Which is odd, really, when you consider how anti-democratic most universities are, and how unlikely academics are to rise in open rebellion against these quasi-feudal institutions.  Pitchforks in the Senior Common Room?  I don’t think so.

So rather than look at Egypt, I want to look at the man who, more than any other scholar of the 20th century, defined the way we think about revolutions.

Crane Brinton was born in Connecticut in 1898.  He went to Harvard, then to Oxford as a Rhodes scholar, before returning to Harvard where he worked until his death in 1968.  He was an expert on the French Revolution, publishing works on the Jacobins and Tallyrand during the 1930s.

In 1938, he published his most famous work, The Anatomy of Revolution, in which he attempted to trace a general pattern that revolutions follow. Using what he saw as a modified scientific methodology, Brinton took 4 ‘revolutions’: the English upheavals of the 1640s, and 1688; the American War of Independence and its aftermath; the French Revolution and the rise of Napoleon; and the Russian Revolution from 1917 (with a brief look back to 1905).

Brinton looked for common patterns within all 4 events that might suggest a general theory of revolution.  He saw, or thought he saw, a progression, from internal breakdown of the old regime, through moderate reform, to the rise of extremism (‘Reigns of Terror and Virtue’), followed by an inevitable reaction against this violence, with a ‘Thermidorian Reaction’, so named for the French revolutionary month of Thermidor (summer heat).  This marked the end of the most extreme phase of revolution, when a more stable government emerged.  In France this period saw the rise of beneficiaries of the revolution’s expropriation of property (from nobles and the church).  Ultimately it led to the rise of a military dictator – the ‘man on horseback’ –Cromwell, Napoleon, Washington and Stalin.

George Washington sits rather uneasily in that company, and the ‘American Revolution’ itself never fitted very well.  It was a war of colonial liberation rather than a revolution, and Washington was more William of Orange or Bolivar than Robespierre or Cromwell.

But the fact that I, too, am now searching for comparisons says a lot about the seductiveness of Brinton’s approach.  It is enough just to look at some of his chapter headings:

2: II: The Transfer of Allegiance of the Intellectuals
3: V: The Honeymoon
6: The Accession of the Extremists
6:IV: The Machinery of Dictatorship

to see how appealing it would be to treat these as a checklist, stages through which all revolutions must pass, rather like Elizabeth Kubler-Ross’s stages of grieving.

Brinton’s book, first published in 1938, was revised several times before his death, as circumstances inevitably overturned his predictions, particularly about the Russian revolution.  As he said himself, in the 1956 Preface, ‘A book of this sort must constantly tempt its author to afterthoughts.’

Yet with all its faults, the book’s influence has been immense.  Just before he died in 1968, he addressed the American Senate to give evidence on the nature of the Vietnamese opposition, and Zbigniew Brzezinski kept a copy of The Anatomy of Revolution with him, when advising Jimmy Carter on the likely development of the Iranian Revolution.  Not bad, for an expert on the Jacobins and Tallyrand.

So – is there a template that all revolutions follow?  And if there was, could we rely on Brinton to unearth it for us?  It is a human urge to seek patterns in events, and historians are better than most at making the attempt.  But human events are not repeatable events, so fail the most basic tenet of the scientific method.  And human events are complex and chaotic – perhaps even chaotic in the true mathematical sense.   A chaotic weather pattern can change because of the flutter of a butterfly’s wings.  In the same way, perhaps, the outcome of a chaotic historical event can also change because of very minor perturbations, such as the length of Cleopatra’s nose, to use another Egyptian analogy. 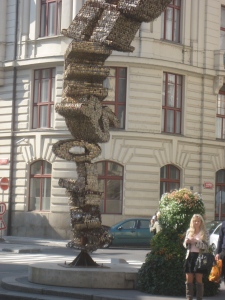 Prague – the not-so-silent revolution of 1989

In 1989, the people of Prague rattled their keys out the windows to express their anger at the communist regime.  After the Velvet Revolution, this statue was created, using thousands of sets of keys donated by citizens who had taken part in the protest.

10 responses to “Crane Brinton, Egypt, and The Anatomy of Revolution”